In a press release on Wednesday the European Commission announced that:

As part of the Energy Union strategy, today the Commission presented proposals to deliver a new deal for energy consumers, to launch a redesign of the European electricity market, to update energy efficiency labelling and to revise the EU Emissions Trading System.

The package is an important step towards implementing the Energy Union strategy with a forward looking climate change policy, launched as one of the political priorities of the Juncker Commission in February 2015. Today’s proposals give prominence to the “energy efficiency first” principle and put households and business consumers at the heart of the European energy market.

The most relevant section to us here at V2G UK reads as follows:

The Energy Union strategy is designed to help deliver our 2030 climate and energy targets and make sure that the European Union becomes the world leader in renewable energy. Achieving these goals will require a fundamental transformation of Europe’s electricity system including the redesign of the European electricity market.

Today’s Communication launches a Public Consultation on what the new electricity market design should look like in order to meet consumers’ expectations, deliver real benefits from new technology, facilitate investments, notably in renewables and low carbon generation; and recognise the interdependence of European Member States when it comes to energy security.

This should reap maximum benefits from cross-border competition and allow decentralised electricity generation, including for self-consumption and support the emergence of innovative energy service companies.

There is another press release that goes into the “new electricity market design” in more detail, explaining that:

Market design is the set of arrangements which govern how market actors generate, trade, supply and consume electricity and use the electricity infrastructure.

It is important that these arrangements, or in other words the design, can transform the energy system, and enable network operators, generators and consumers – both households and industry – to take full advantage of new technology.

The wholesale and retail markets should provide the basis for investment decisions, and boost the development of new services by innovative companies. In a network industry like electricity, an effective market design needs effective regulatory oversight, in particular distribution and transmission system operators.

The European Commission’s new electricity market design initiative aims to improve the functioning of the internal electricity market in order to allow electricity to move freely to where and when it is most needed, reap maximum benefits for society from cross-border competition and provide the right signals and incentives to drive the right investments, while fully integrating increasing shares of renewable energies.

An accompanying document explains that “By adjusting demand, consumers can
save up to €5 billion a year”: 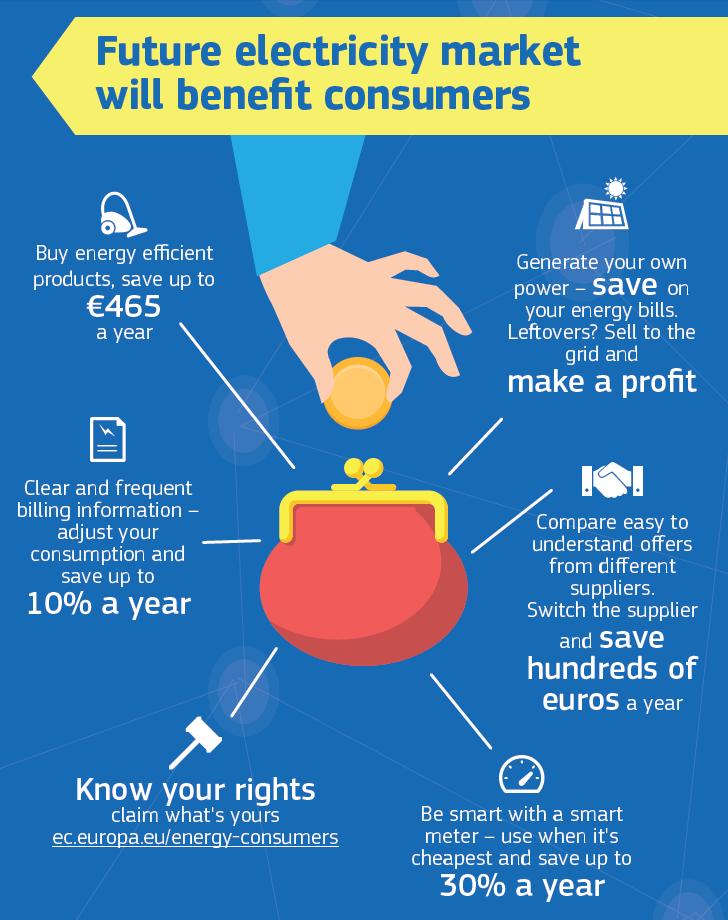 However as you can see there’s nothing in the infographic about how a future “European Energy Union” will help “prosumers” purses get filled to overflowing with euros thanks to making static and/or mobile distributed energy storage available to the local distribution grid at its hours of greatest need. It looks as though we’ll have to fill in a form “by Thursday 8 October 2015 at the latest” and let the EC know our views on that subject!