In a press release last week redT Energy announced that it:

Is pleased to announce that in partnership with Centrica, its flagship UK 1MWh energy storage project is now fully operational and connected to the UK grid

This is exciting news because the project is located in North Cornwall just like us!

redT’s machines located at The Olde House, a 600 Acre working farm and holiday retreat, situated in North Cornwall, will be used as a ‘flexible platform’ enabling the customer to generate strong commercial returns and utilise significantly more of its renewable solar onsite generation. redT expects this type of project to achieve an IRR % in the mid-teens. The energy storage machine has a 25+ year asset life, thus proving the strong investment case for redT’s patented vanadium redox flow machines.

This is the largest operating containerised vanadium redox flow machine system in the UK and the first commercial energy storage system to sign up to Centrica’s Local Energy Market trial. The LEM is a £19m project designed to demonstrate the role that flexible generation and storage can play in relieving pressure on the grid and driving down energy prices in the UK.

Here’s what the containerised flow machine (not battery!) looks like: 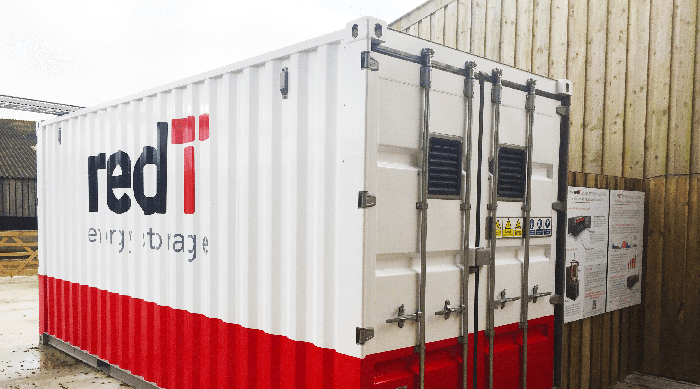 Somewhat unusually the redT press release has an accompanying sound track. It’s an interview with redT CEO Scott McGregor, which you can listen to here. Note in particular the section at 1 minute 40 where Scott says:

The Cornwall grid is probably one of the weakest grids in the UK and has a GW of renewables on it, but it’s stuck. You can’t put any more on.

This is of course a big problem! Going back to the redT press release we are informed that:

The potential addressable market for behind the meter industrial and commercial (I&C) energy storage in the UK is in the range of 3,000 GWh total (calculated using 2016 Digest of UK Energy Statistics (DUKES) data). Making a conservative assumption of 20% take up across all I&C sites in the UK, this equates to 8 million redT tank units.

Here at V2G UK we cannot help but wonder if all the energy that could be stored in the battery packs of millions of future electric vehicles might not come in handy too?