Spanish renewable energy company ACCIONA Energy have just announced (in a slightly strange translation into English) that they have:

Materialized the first European experience of real operation of a grid-connected photovoltaic plant on an industrial scale with energy storage in batteries.

In somewhat plainer English, ACCIONA have installed a 1.1 MW / 560 kWh modular lithium-ion battery system supplied by French battery manufacturer Saft at their existing 1.18 MWp solar photovoltaic site at Tudela in the Navarre region of northern Spain. Please note that Navarre currently obtains most of its electricity from renewable sources, unlike the rest of Europe! 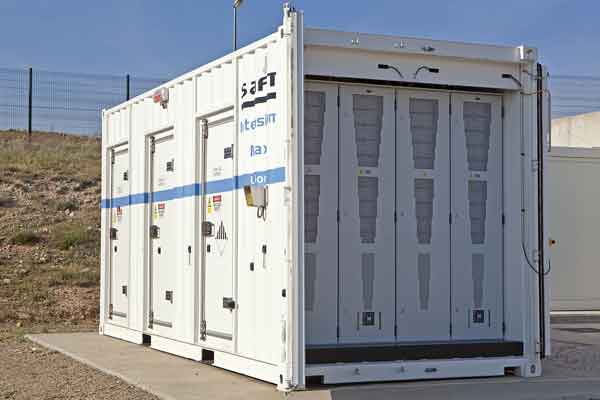 According to Bloomberg New Energy Finance:

We are seeing more batteries being used with renewables, for both solar and wind. We expect the electric vehicle market to be a key factor in driving down the cost of lithium-ion batteries used for grid storage.

According to Miguel Arraras, Acciona’s head of photovoltaic development:

Solar and wind parks of at least 1 megawatt can affect the stability of the transmission grid. This project is important because we see utilities forcing plant operators to reduce peaks and troughs in output in the future.

Storage with Saft lithium-ion technology currently adds about 25 percent to the capital expenses of a solar park and is expected to add less than 20 percent by 2015.

Getting back to ACCIONA’s own press release, they say that:

ACCIONA has developed strategies to manage the photovoltaic plant with the most efficient power storage, both in the use of the batteries to modulate the delivery of power around the plant and in the provision of ancillary services to the grid.

The plant control system takes into account production forecasts for the facility, market prices, system operator instructions and the state of the grid at any given time in order to select the right operating strategy. It monitors the operation of the entire plant and also sends real-time information to the network operator.

The innovative approach of the ILIS project (the acronym corresponds to Innovative lithium-ion system management design for MW solar plants) is not only ideal for the development of solar power in developed countries that have centralized electric power systems, but also in emerging countries with weak grids that are very sensitive to distortions. These problems can be overcome by the solutions contained in the project, thus extending the potential market for photovoltaic power.

As ACCIONAS perhaps imply, I anticipate that this type of technology (which we refer to as S2G here at V2G) will prove to be essential in developed countries too!