On Tuesday I attended a meeting organised by Exeter Community Energy. The theme for the evening was “UK Energy Policy and the role of community energy”, and the main speaker was Catherine Mitchell who is Professor of Energy Policy at Exeter University, and was a lead author in the Inter-Governmental Panel on Climate Change Working Group 3’s recent fifth assessment report. To summarise briefly, Catherine had many more good words to say about community energy than she did about Great British Energy Policy!

It quickly became apparent that Catherine felt that the change “from ‘dirty’ energy to sustainable energy” is happening much faster elsewhere in Europe, and further afield, than it is here in the UK. After taking a while to consider a suitable epithet she settled on “constipated” as the best descriptor of UK energy policy!

Energy is always political, and has become much more political under the coalition government. Rational evidence based decision making has stopped. The current focus is on nuclear power, with only lip service being paid to renewable generation, demand management, demand reduction and community energy generation.

What positive changes that are taking place are “moving in from Europe”. Catherine moved on to give an overview of the current state of play of electricity generation across Europe. Broadly demand in the 21st century has been constant, with a slight dip due to the recession in 2009. The renewables’ share of  total generation has been increasing throughout that period, and the most recent figures show much more renewable capacity being constructed than fossil fuels or nuclear.

In the UK wholesale prices are the 3rd highest in Europe, and interconnections with other countries, which are “very helpful for renewables”, are lacking. Great Britain and Poland “are trying to water down” the EU 2030 framework for climate and energy policies. Conventional utilities are however “under threat” due to the low marginal costs of renewable energy sources, which undermines their business model. However in the UK “self reinforcing governance” makes it hard for new entrants to challenge the “Big 6”, who currently have 91% of the UK electricity market, and even more for energy overall. However “despite this, there are some changes”.

Community energy policy is “very inconsistent”, but there are new demand side entrants such as Tempus Energy, and new financial models from the likes of OVO Energy. Combined heat & power “is starting to come together”, but “the Big 6 don’t want to change. People need to start to do things differently”. Here’s how the UK energy cookie currently crumbles according to Tempus: 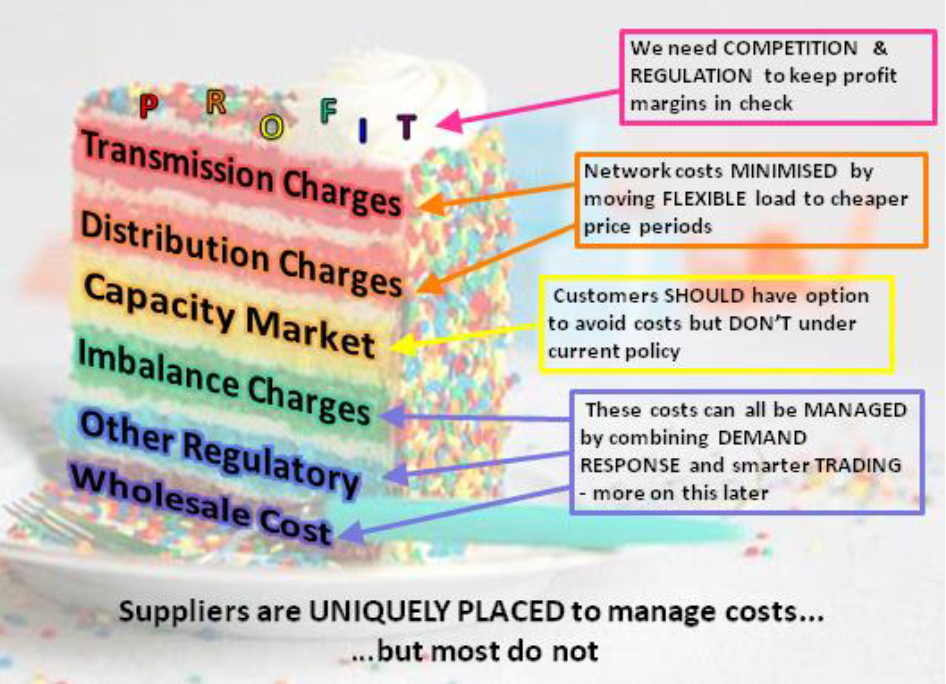 and here’s a video in which they explain how matters might be improved by using “a smarter approach for everybody”:

At that point the questions from the audience began. The one that most interested me concerned energy storage, and the possibility of getting paid for providing that useful service. According to Catherine “Norway is doing wonderful stuff, Germany has started, but there are no plans in Great Britain”. A member of the audience pointed out that the Renewable Energy Association had recently launched “UK Energy Storage” to lobby government, apparently:

The trade body for all storage technologies across the UK

I waved my hand in an endeavour to point out that the Electricity Storage Network has in fact been around for quite some time now, and say they are:

The industry association for the promotion of electrical energy storage.

However my turn to ask a question didn’t come around until right at the end of the evening. It seemed apparent that Catherine wasn’t very impressed by current UK energy markets, and I wondered:

Whether any future market based on “Anglo Saxon Capitalism” would be up to the job of solving the “energy/climate conundrum”?

Catherine assured me that she didn’t see capitalism going away for the foreseeable future. The slides from her presentation can be downloaded from the IGov web site.

Last year, in her role as an IPCC lead author, Catherine Mitchell also gave a presentation about UK energy policy at the Transformational Climate Science conference at Exeter University. Here it is:

Catherine also published an article on the IGov web site after that conference. For additional background information please also read:

“In Matters Of Climate Change, The Environmental Requirement Must Take Precedent Over Short Term Economic Goals”

Catherine’s conclusion was that:

We as individuals and communities in civil society have to do all we can to get our politicians, neighbours, businesses, energy suppliers and so on to take climate change seriously. Climate and energy policy must take note of the IPCC warning and act now.