Western Power Distribution and Regen SW have just released a report on the results of their consultation concerning “Energy Storage Growth Scenarios and Operating Modes“. The entire report is worth a read from cover to cover, but here are a couple of extracts that immediately caught our eye here at V2G UK:

On 13th July 2017, National Grid published the latest version of their Future Energy Scenarios (FES) strategic document. This document considers and discusses the role of energy storage in the future in 4 key energy scenarios. In these scenarios, storage is referenced as a provider of flexibility, both for response and co-location with intermittent generation (both solar and wind) and highlights the expectation that energy storage will be a significant part of the ongoing energy transition towards a smarter and more distributed electricity system. National Grid forecast strong growth in energy storage (in all scenarios) over the next few years, such that a total of 6 GW is forecast to be connected to the UK electricity system by 2020. Beyond this,National Grid expectation for energy storage growth varies significantly across the scenarios proposed, with the highest two scenarios showing storage grow to 10 GW by 2050 (Consumer Power-10.7 GW and Two Degrees – 9.8 GW). The considerably lower level of storage growth (under the Steady Statescenario) shows 5.2 GW by 2050, due to low levels of available funding, coupled with a reduction in capacity from 2030 onwards, as a result of existing assets not being replaced when they reach end of life. 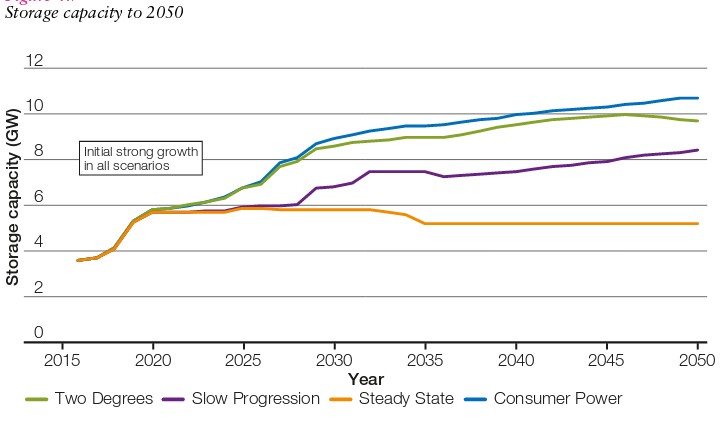 There is also this V2G specific section:

A number of market analyst’s reports have projected energy storage growth scenarios, these include National Grid Future Energy Scenarios (see Fig.4), Committee on Climate Change, Carbon Trust and UK Government.As a starting point for WPD’s modelling, we are proposing to take a:

Note: these figures include 2.7GW of existing pumped hydro storage.

The introduction of significant number of electric vehicles under “Vehicle-to-Grid” (V2G) arrangements could be one factor that results in storage deployments levels increasing above the values we proposed. However, other comments received also identified regulatory barriers as a key factor that could perhaps limit deployment to levels potentially even beneath the lower growth scenario proposed. The wide margin between the high and low growth scenarios presented was recognised as an accurate reflection of market uncertainty.

We couldn’t agree more. There is currently much “market uncertainty” concerning energy storage in general and V2G technology in particular. Removing the “regulatory barriers” to progress would be most welcome down here in North Cornwall!