Nissan announced last week that from the middle of this month its Japanese dealerships will be showcasing:

An industry first backup power supply system that can transmit the electricity stored in the large-capacity batteries of Nissan LEAFs to a residential home.

Here’s a video in which Nissan corporate vice president Hideaki Watanabe explains the benefits of such a system:

The technology is actually supplied by Nichicon as part of their “EV Power Station” fast charging units. According to Nissan:

The LEAF to Home system will help encourage Nissan LEAF owners to charge their cars with electricity generated during the night, when demand is low, or sourced from solar panels. This assist in balancing energy needs by supplying electricity to the grid during daytime, when demand is highest. It can also be used as back-up power source in case of power outages and/or shortages.

The [LEAF’s] lithium-ion batteries can store up to 24kWh of electricity, which is sufficient to supply an average Japanese household for about two days. This system underscores an additional attribute of EVs: vehicles which can be used as a storage battery whether they are moving or stationary.

Nissan say that “all current Nissan LEAF owners in Japan will be able to use the system, depending on their home’s installation requirements” as long as they have 330,000 yen to spare (after Japanese government subsidies). Nissan are forecasting sales of 10,000 “LEAF to Home” systems in the first year.

We are starting from Japan, but if there is interest from other parts of the world we are willing to partner up with any other partners. This time we are partnering up with Nichicon, so we can go out to other countries and partner up with other global suppliers.

Nissan and Nichicon will continue to work together to create new value in EVs as part of the way forward toward the realization of a zero-emission society.

although they don’t forecast when such a society will be realized!

P.S. The video mentioned above seems to have disappeared, so here’s an infographic of Nissan’s V2H technology instead: 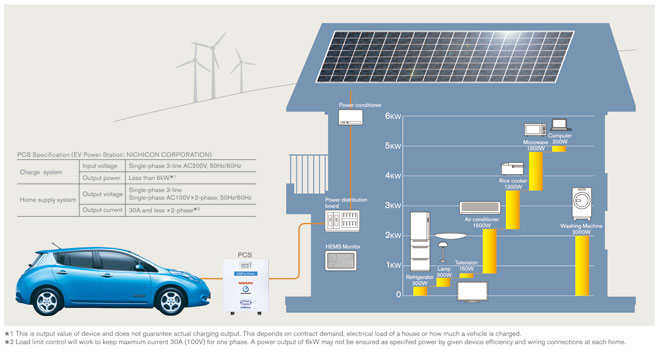