At May’s film night in Dunchideock Village Hall it was announced that anybody interested in learning more about the recent power cut in the village could “read all about it” on this very web site. A cry was heard from the audience:

Which one is that then?

It has now been brought to my attention that the other end of the village has suffered far more from the absence of electricity this year than my own particular neck of the woods. Having engaged in further communications with some local residents and Western Power Distribution I have another long tale of woe to tell!

There was undoubtedly much wet and windy weather around the Haldon Hills earlier this year. According to the UK Met Office, handily situated just up the road in Exeter, in their summary of Winter 2013/14:

Winter 2014 was an exceptionally stormy season, with at least 12 major winter storms affecting the UK in two spells from mid-December to early January, and again from late January to mid-February. When considered overall, this was the stormiest period of weather experienced by the UK for at least 20 years. An analysis of pressure fields by the University of East Anglia suggests this winter has had more very severe gale days than any other winter season in a series from 1871.

All those storms didn’t appear to have any long lasting impact on the southern side of Dunchideock at the time, but the story is rather different slightly to the north. Here’s a map of Western Power Distribution’s high voltage electricity network in the area: 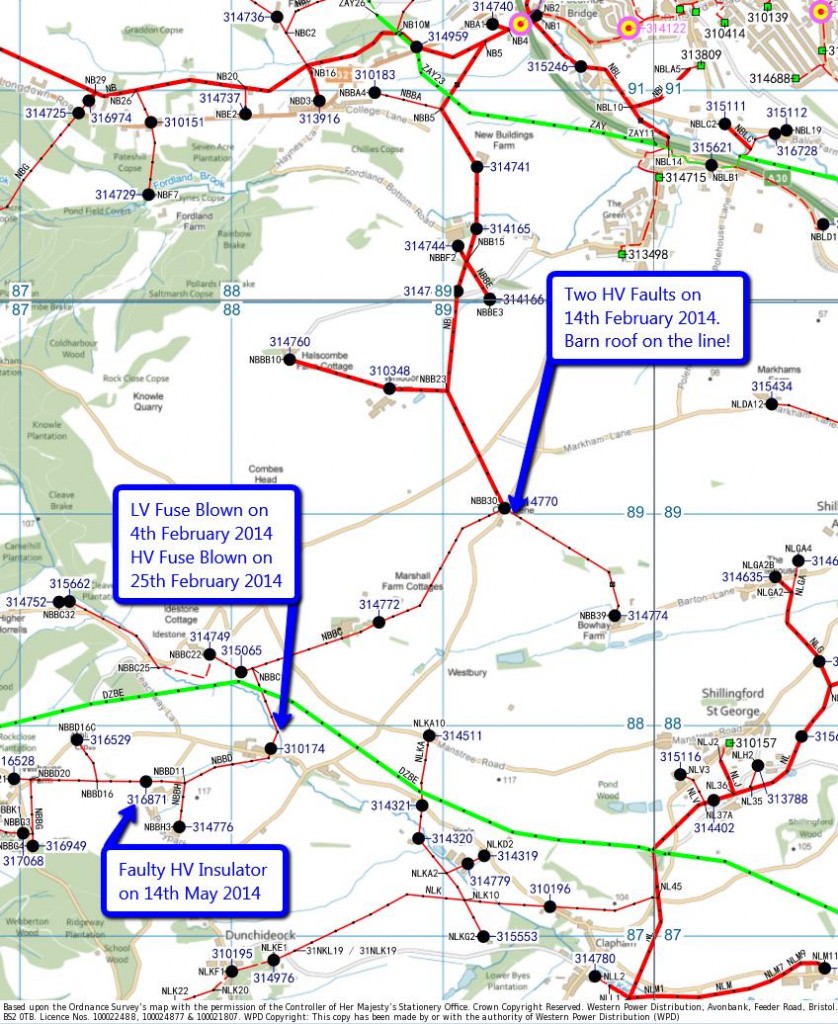 Hopefully it is now apparent to you that the northern part of Dunchideock is on a completely different “circuit” to the southern part. You can also see that there have been a few electricity supply issues over the past few months! Taking them in chronological order, the first outage was on Tuesday February 4th. It’s unlikely to be mere coincidence that on the same day the Met Office issued a press release saying that:

The stormy conditions are expected to bring damaging gusts of wind of up to 60 mph inland and perhaps as high as 80 mph along some southern and western coasts of Britain on Tuesday night and Wednesday. These severe gales, combined with further heavy rain may cause some disruption because of fallen trees and high waves in coastal areas.

The net result as far as northern Dunchideock was concerned was:

A power cut from 21:00 to 02:00 on the 5th. When the power went off alternate houses in the road came back on after a minute or so and stayed on.

According to Western Power Distribution the immediate cause was that:

One of two low voltage fuses blew (on a split phase transformer). Hence 50% of customers would be on supply. 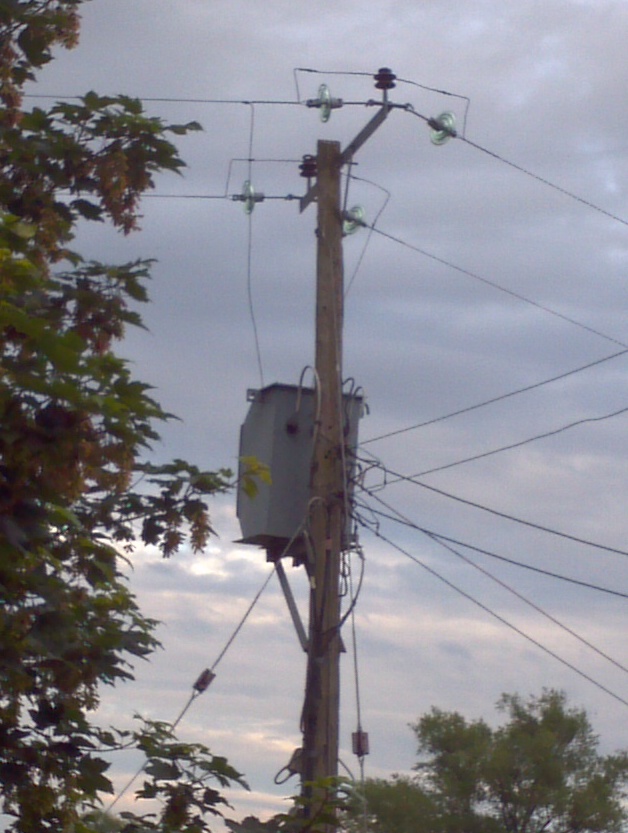 Ten days later the real “Great Dunchideock Blackout” occurred. According to the Met Office once again, in their forecast for Friday February 14th:

The Met Office was so concerned about the wind speeds on Wednesday a Red weather warning was issued for wind, the first red warning since January 2013. Extremely strong winds were seen in the south and northwest of England and parts of Wales.

We have another weather system crossing the UK on Friday bringing further heavy rain and very strong winds, leading to a number of weather warnings being put in place. The rain will push into the UK from the southwest during Friday morning, moving quickly north eastwards.

There are Yellow weather warnings for wind in place for the South coast and round into East Anglia with an Amber weather warning for wind along the South coast. We are expecting some gusts of around 60 miles per hour inland and perhaps 80 miles per hour in exposed areas along the coast itself. With these very strong winds large waves will push onto the coastline with dangerous conditions possible as well as some localised coastal flooding.

Here in Dunchideock, for the residents of Thornes Meadow at least, the result was a power cut lasting almost two days:

The second power cut was on 14th February at 19:30 and the electricity did not come back on until 14:00 on the 16th. Everybody in Thornes Meadow was off this time. The recorded messages of restoration times were continually put back.

As you may be able to imagine, in such circumstances Western Power Distribution had a very long list of problems to deal with. The immediate issues for Dunchideock were:

Two separate  High Voltage faults (conductors down due to trees and an entire barn roof being blown onto the line).

Due to the number of faults WPD had to bring in extra engineers from the Midlands and South Wales to help with the repairs. In normal circumstances the UK electricity market regulator Ofgem specifies a maximum 18 hour time limit on restoring electricity supplies. However in extreme circumstances this can relaxed. Ofgem themselves foresaw the potential difficulties, and issued a news release of their own on February 12th, stating that:

Severe weather is currently forecast across Great Britain. Electricity distribution companies, who own and operate the local networks, are making preparations ahead of this weather. We set rules on how quickly companies have to respond to restore power in both normal weather and severe weather conditions.

For severe weather there are different categories according to the severity of the storm. The category sets the amount of time companies have to restore power before compensation must be paid. The category is determined by the number of major faults experienced within a 24 hour period on the distribution company’s network.

The distribution company may be able to give an initial early view of what category the storm is but the data is checked and verified by us. The time you are off supply before being able to claim payments varies according to severity of storm. This is because the companies will have more work to do to fix faults.

In this case the storm was ultimately classified as category 2, and hence the unfortunate residents of Thornes Meadow are not entitled to any compensation despite being without any electricity supply for nearly two days.

Moving on to the next outage, which took place on “February 25th from 18:50 to 19:45” on which date there were no special press releases from the Met Office. Thankfully this power cut was of much shorter duration than the previous one, and was because:

Finally we come to May 14th, when “a faulty high voltage insulator” led to a power cut in properties supplied by transformer 31/6871 in the vicinity of Dunchideock Church. Once again the weather wasn’t sufficiently inclement to warrant a Met Office press release.

All of this additional information leads me to conjecture yet again about all those blown fuses and faulty insulators. What stresses and strains is our local electricity distribution network being subjected to these days by the combination of lots of inclement weather and renewable electricity generation, down here in not always Sunny South West England?

Rather too many for comfort would seem to be the answer, if Dunchideock’s recent experience is anything to go by.