A lot of people are afraid or even horror-struck with the idea of driving in an autonomous car. But I belong to the opposite group – I dream about an autonomous car, I long for it and I long to have one. An ideal one would be able to float over the roads and country lanes. For these longings and dreams about floating self driving vehicles I should probably blame SF writers.

To make it clear I am not a professional test driver, I don’t work for Nissan, I am a woman, 62 years old, an artist and writer but also a huge fan of electric cars. 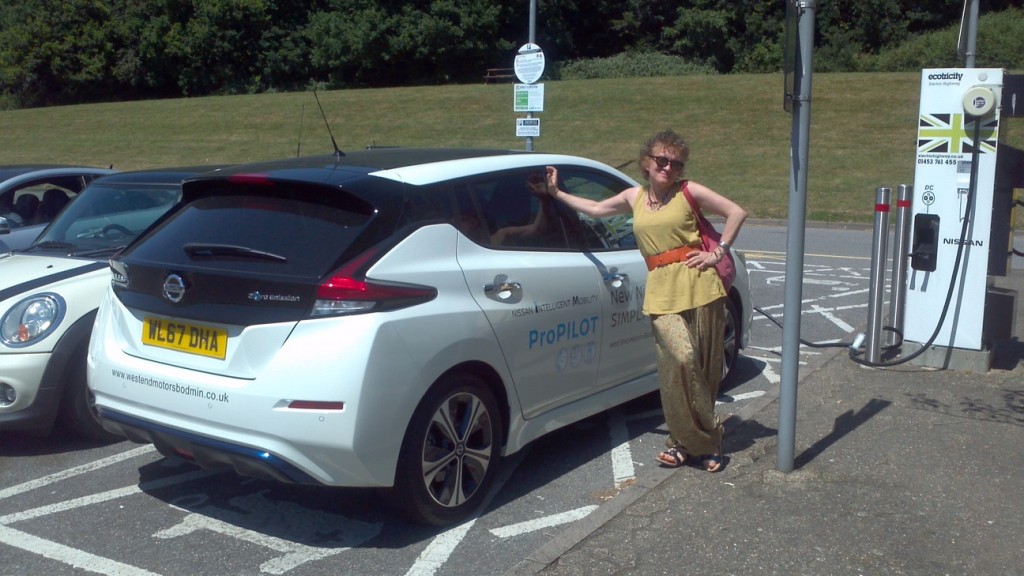 A few days ago (Today is June, 30th 2018) we had the pleasure to go on an alas not many days journey in a new Nissan Leaf with the proPILOT “autonomous” mode, from the North Cornish town of Bodmin, through Devon (A30 and M5), Somerset, across country lanes and carriageways into Wiltshire, then Gloucestershire to sunny Cardiff and then back. The sun was shining, the air-conditioning was working, the temperature outside was rising above 30C and the quality of the audio was flawless and using the Amazon Music app we could listen to the newly released 50 legendary albums.

To start with I felt a kind of uneasiness and unreal-ness when using the cruise control – could I really trust the car to control things in all the busy traffic on the M5 and to take the decision about slowing down behind other cars and then accelerating again? Could I just start a series of yoga legs and feet exercises without causing an accident? I have to tell you that I could. The car is intelligent enough to keep us in a lane, to anticipate the bends in the road, to read all the traffic around it, to spot the car in front of it, even a car which cuts us up. I was trying to drive without keeping my hands on the steering wheel, the car was driving totally autonomously but not for long. After a while it started piping and blushing at me. I had to put my hands back on the steering wheel otherwise according to the manual the car will start to slow down and finally will make a stop. Not a good idea on a motorway.

The Leaf in the cruise control (ACC for short – adaptive cruise control) mode performs marvellously on the motorway, it also does a spot-on job on partly B-roads, partly A-single and dual roads and even those roads in the towns and villages, something none of these systems is really made for but is a good indication of how well they read lane markings. The Leaf stays within its lane at the speed limit, reads all the diverse speeds limits between 70, 60, 50,40, 30 and 20 miles/h and even drives itself around corners sharper than those on the average highway.

Several times on those roads we encountered stop-and-go traffic and the ACC was able to track the vehicle ahead of it stationary at the line for a stop sign or just for busy traffic and after waiting it started to move forward when a gap opened to the car in front. Just marvellous. On the last day I tested the e-pedal – one pedal system and it worked fabulously too. I totally forgot to say that I drove all the time in eco-mode. And even in the eco mode the acceleration of the Leaf was pretty good, in my opinion. A few times I speeded to over 70 mph to overtake a few annoying cars on highways/motorways and it happened pretty fast only the car did complain about my behaviour ;-).
It is an intelligent car – perfect for me, an undisciplined car driver, to correct me and teach me how to behave as a civil and polite person and citizen on the roads.

We did have issues with charging. Every time we left the Leaf at a charging point to become fully charged, it never happened. The Ecotricity chargers stopped every time after charging for 45 minutes. It is a pity.

The only concern for me is the seat, more specifically the headrest. It is pushed forward too much for my taste, and it is impossible to adjust it. It only moves up and down. Maybe it is my problem because I am short, 5’2 inch.

It is fair to say we were simply amazed by the proPILOT autonomous functionality. I love this car, just love it: