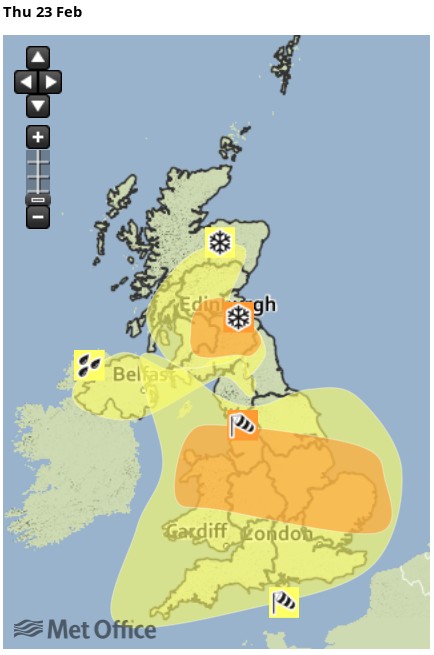 According to the Met Office forecast for the West Midlands:

Some very strong winds are expected on Thursday in association with storm Doris with gusts of 60-70 mph likely, and 70-80 mph on coasts and hills.

There is still some uncertainty about the track of storm Doris, but increasing confidence that there will be widespread disruption across parts of England and Wales.

Earlier this morning we took a snapshot of Western Power Distribution’s live power cut map. It looked like this: 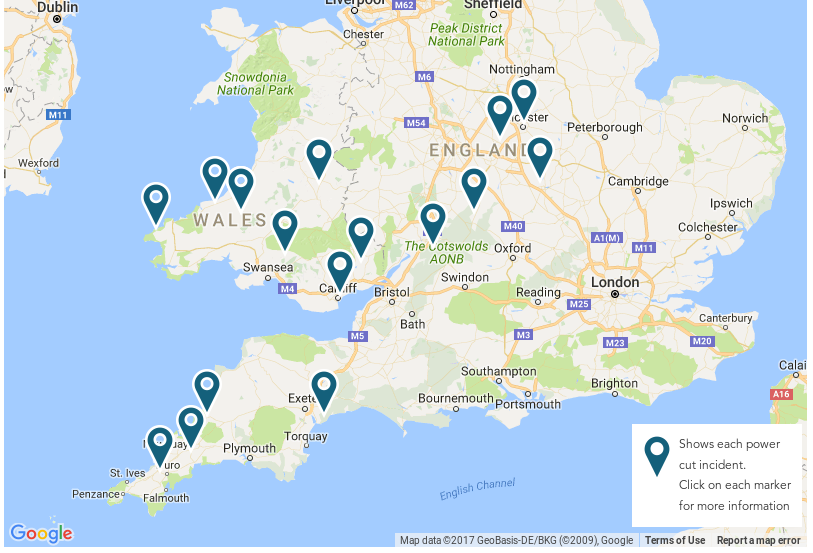 It’s now 10 AM on Thursday February 23rd, and WPD’s map now looks like this: 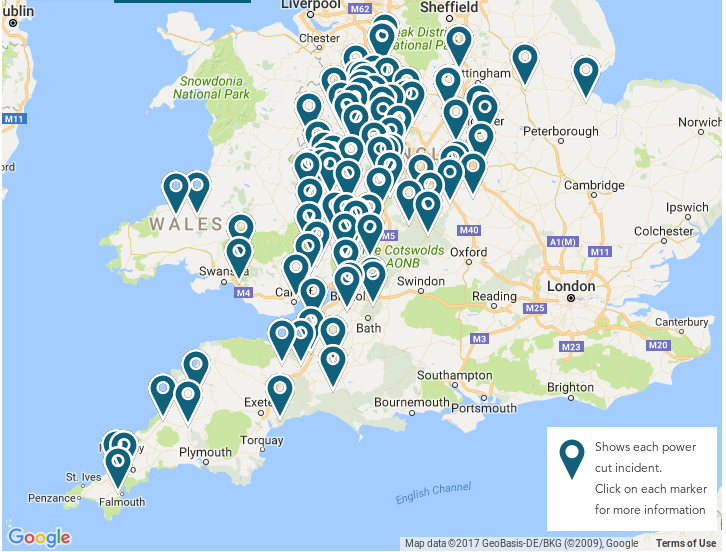 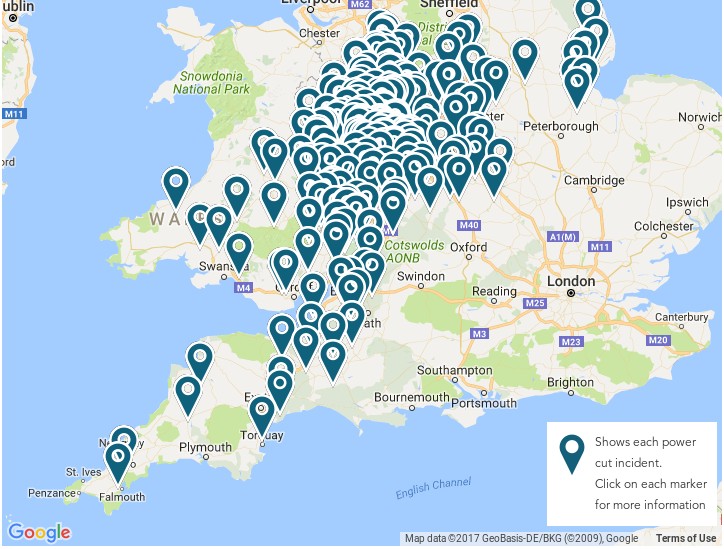 Electricity Northwest are tweeting helpful information to their online customers:

Don't forget severe gales can cause damage to overhead power lines. If you see lines down pls stay away & contact us immediately #StormDoris pic.twitter.com/fR4qtIOirq

So are UK Power Networks:

However if you’ve just had a power cut you’d need to have a UPS for your PC in order to read those helpful messages! Or a fully charged mobile device with nearby comms towers still powered up! 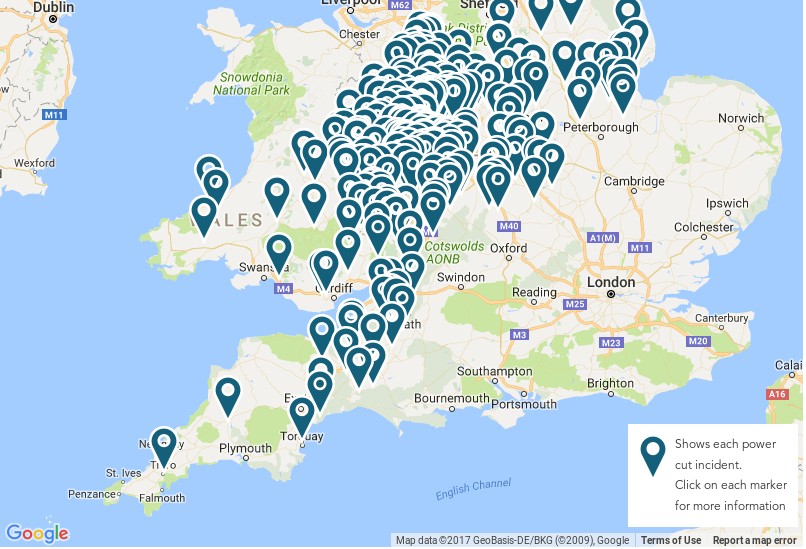 SSEN engineers are making good progress in reconnecting customers affected by damage to overhead lines and network equipment. Since midnight, SSEN engineers have successfully restored power to over 22,000 homes, with approximately 5,000 homes currently without power. All faults are fully resourced and all customers are expected to be restored tonight.

The worst of the conditions have been observed in Oxfordshire, Berkshire and Hampshire where a wind gust of 65mph was recorded in Odiham.

SSEN has more than 1,000 engineering, technical and support staff on duty. Ahead of the storm, engineering teams were mobilised to key locations to minimise disruption and inconvenience to customers.

Customer service teams have been contacting over 7,000 customers on our Priority Service Register to check on their wellbeing in case they need additional help. 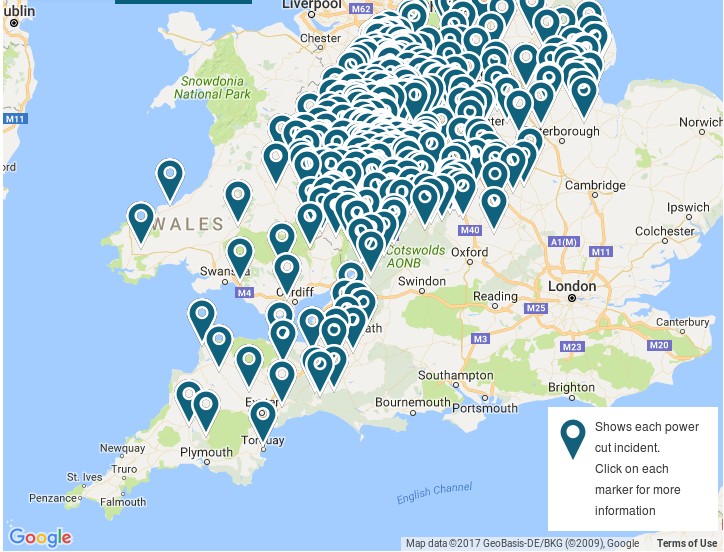 @V2gUK yes we're aware of the problem, and working hard to fix it as soon as possible 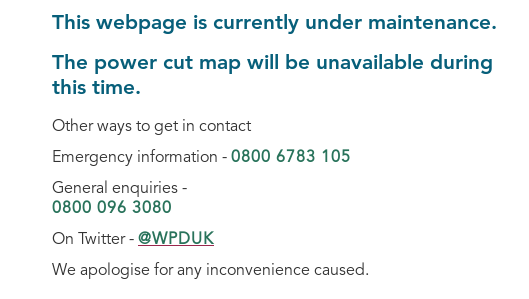 It’s obviously fairly breezy across the United Kingdom today! Let’s take a look at the current UK electricity generation mix at the moment, courtesy of GridWatch:

We are currently exceptionally busy within WPD with the East and West Midlands area being especially affected in particular by the effects of Storm Doris so far.

The West Midlands has been significantly affected with almost 22,000 customers currently off supply with the vast majority being affected between 09:00 and 12:00 with Hereford, Ludlow, Worcester, Telford and Stoke suffering the worst effects.

During the last hour the fault rate in East Midlands has picked up where we have around 10,000 without power as the storm is now tracking eastwards as expected.

Our engineers are currently working hard to restore supplies as quickly and safely as possible, and we have additional staff in our Contact Centres, Control Rooms and operational depots.

The South West and South Wales areas were impacted earlier today, but not exceptionally so. Both areas have fewer than 3,000 customers affected and all incidents are currently resourced and being worked on.

Electricity North West have issued a press release, which begins:

The region’s power network operator has restored supplies to around 5,000 properties throughout the morning following the Met Office’s amber weather warning for severe gales of 70 to 80mph and a yellow warning for snow to hit the North West today.

Around 2,500 properties remain without power as flying debris has hit lines and high winds make access difficult for repair teams. Properties are affected mainly in Lancashire, Manchester and the Peak district including250 properties currently without power in Horwich, Bolton.

SSEN engineers are making good progress in reconnecting customers affected by damage to overhead lines and network equipment. Since midnight, power has been restored to over 29,000 homes, with approximately 8,000 homes currently without power. All faults are fully-resourced and we are working to restore power to all customers tonight.

The worst of the conditions have been observed in Oxfordshire, where around 5,000 customers are currently without power, as well as parts of Berkshire and Hampshire.

The MET Office Amber warnings remain in place until 8pm tonight as Storm Doris continues to cause significant impact across the UK.

SP Energy Networks distribution licence area in Cheshire, Merseyside and North Wales has experienced extreme weather conditions today, with wind gusts of over 90mph experienced in exposed areas. Over the course of today we have restored power to over 50,000 customers impacted by this severe weather.

Our restoration efforts have been hampered today by the gale force winds making it unsafe for our engineering teams to work at height. The winds have now reduced somewhat, albeit we are still seeing wind gusts in excess of 50mph in exposed areas.
However, where it is safe to do so, our restoration efforts will continue this evening and tonight. As a result of the extensive damage experienced today, we now expect that some customers will be without power overnight.

Engineers from Electricity North West will work into the evening and through the night to restore the final properties affected by Storm Doris.

The region’s power network operator has restored supplies to around 6,700 properties throughout the day following the winds of 70 to 80mph in the North West.

800 properties remain without power in a number of small pockets, mainly across Lancashire as flying debris and fallen trees have hit power lines in the region.

The current situation within WPD is still exceptionally busy, with the East Midlands, and even more so the West Midlands areas still having large numbers of customers off supply due to the effects of Storm Doris that passed through our area today.

There are approximately 20,000 customers in the West Midlands off supply and we have restored around a further 20,000 throughout the day. As of the last update the worst affected areas have been Hereford, Ludlow, Worcester, Telford and Stoke.

There are currently fewer than 10,000 customers off supply in the East Midlands with us having restored a further 10,000 approximately throughout the day.

Whilst busy, the volume of faults affecting the South West and South Wales have not been too bad, with all incidents being worked on and resourced. There are currently fewer than 1,500 customers off throughout the two areas and staff from those areas have been moved into the Midlands to assist where required.

Our contact centre has dealt with over 22,000 calls from customers with an average speed of response time of 6.7 seconds.

We have had one helicopter airborne today flying from Nottingham that has inspected two EHV faults in Stoke and Telford. Tomorrow, all four aircraft will be available from first light to aid and assist in repairs as required.

It’s now 20:00 on the evening of Thursday February 23rd. WPD’s live power cut map is operational again, and it’s moved to a dedicated subdomain! Here is what it reveals: 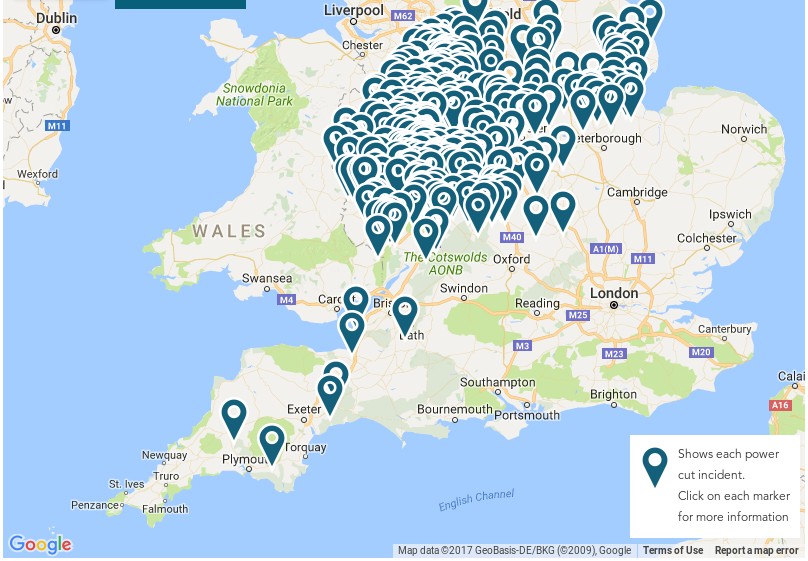 This will be our last update for today, at 22:30 on the evening of Thursday February 23rd. First of all WPD’s live power cut map, zoomed in on the Midlands: 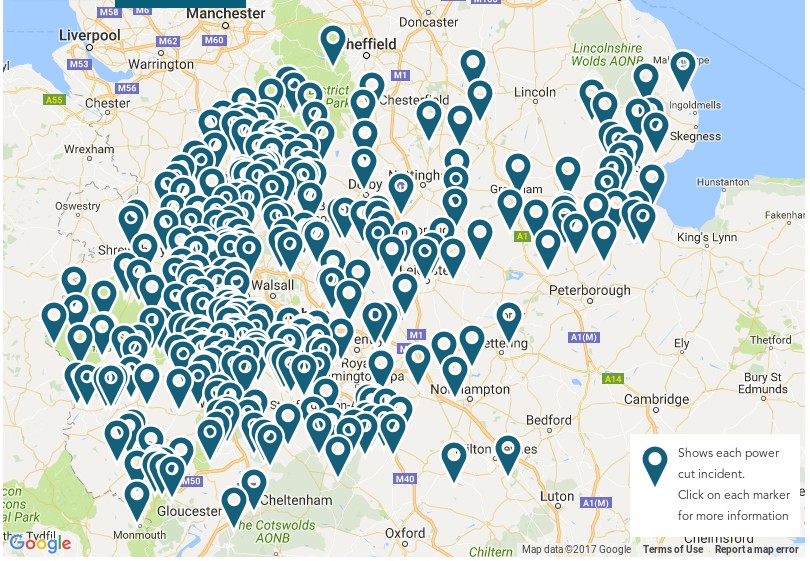 Next the 20:00 update from Scottish and Southern:

Since midnight, power has been restored to over 30,000 homes, with approximately 4,000 homes currently without power. All faults are fully-resourced and engineers are working to restore power to all customers tonight.

Storm Doris brought severe winds, with gusts of up to 65mph, across the region. The worst of the conditions were felt in Oxfordshire, where around 2,500 customers are currently without power. Extra linesman and repair teams have been despatched to the area to aid restoration efforts. Parts of Berkshire and Hampshire were also affected.

Finally the 21:30 update from Scottish Power:

Over the course of the day our distribution licence area in Cheshire, Merseyside & North Wales has experienced extreme weather conditions, including winds in excess of 90mph. As a result of these storm force winds, our network has sustained a level of damage resulting in a loss of power for some of our customers. Despite the extremely challenging conditions, and the restrictions that our teams have faced working at heights in such extreme conditions, our engineers have worked tirelessly over the course of today to restore power to as many homes as possible, restoring power to over 66,000 people. However, a number of customers will remain without power overnight and we will make every effort to contact these customers tonight.

We continue to work to maximise our resource levels, with additional engineering teams from our Scottish distribution area already dispatched to support the restoration efforts as well as continuing to work with our contracting partners to secure additional resources. We will also be looking to mobilise helicopters tomorrow morning to help the fault finding process on some of the more challenging terrain.

For a warming nightcap after the blustery day here’s the GridWatch UK electricity generation mix tonight, including the minor contributors: 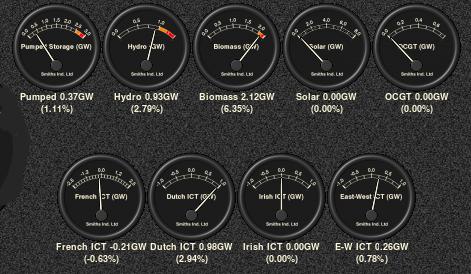