According to an article on the myenergi blog:

Last week, we had the unveiling of our newest flagship product – the new zappi range. The event was hosted at Millbank Tower overlooking the Thames and we were delighted to host some of the most influential people within the EV industry.

The stars of the show were the new zappi models: the single-phase, 7kW variant complete with its fresh makeover and the highly-anticipated three-phase, 22kW zappi– both available as tethered and untethered units. Details about the new soon to be released myenergi hub device and app, offering internet connectivity for remote control and live view of energy flow, were also presented to highlight the advancements of our exciting product range. As well as being able to perform as a regular charge point for customers who don’t have solar or wind on their property, these new exciting developments add significant value to our customers with grid-tied microgeneration systems – particularly when maximising the benefits of the zappi’s three different charging modes. The zappi maintains its ability to limit what grid supply it can take whilst looking to access any surplus green energy available, ensuring it remains the most eco and customer-friendly charge point on the market.

We have previously praised the virtues of the 7kW zappi, and now there’s a speedier 3 phase version too! 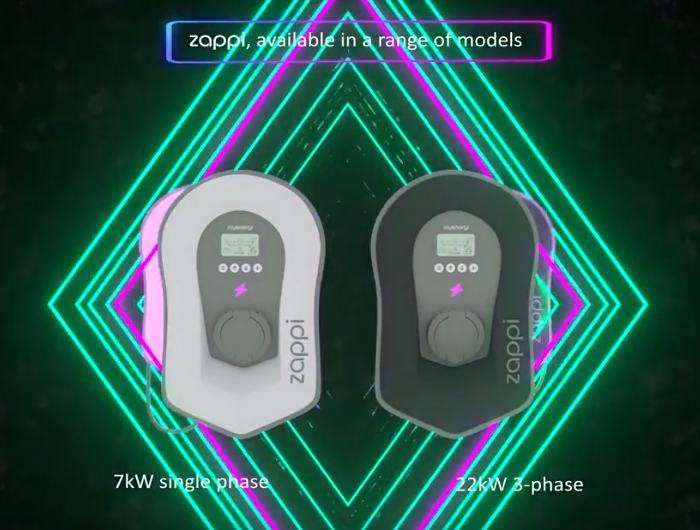 Not only that, but also:

One particular highlight from the launch that will be music to the ears for all the installers out there is that the new zappi complies with the BS7671 18th Edition regulations which comes into force January 2019 and is currently the only charge point available where in most cases an earth rod is not required during the install – an installer’s dream!

Apparently myenergi is also an investor’s dream, since the article continues:

Sir Terry Leahy, myenergi investor and former CEO of Tesco, offered words of wisdom and highlighted the positive steps being taken as we remain proud flag-bearers at the forefront of the rEVolution and our friend at Evergreen Smart Power, Andy McKay, gave an exciting and insightful look into the future of green energy. Robert Llewellyn, the former Red Dwarf actor who now fronts the YouTube channel, Fully Charged, was present to champion our cause and we had further support from Fiona Howarth of Octopus Energy who discussed the successful partnership they have with the myenergi team.

myenergi are taking advance orders now, and manufacturing starts in January 2019. Whilst we wait to see a zappi 2.0 in the flesh, here’s the launch video:

zappi can work alongside battery storage and is an easy retrofit into any home scenario.