I’ve been out on the road this week, explaining the potential benefits of vehicle-to-grid technology to a variety of audiences. First up on Wednesday evening was the “Autumn Connect” event at Exeter City Futures, where I made a presentation entitled “V2G – How to simultaneously store energy and reduce congestion.”. I had the luxury of being allowed 5 minutes to present an “elevator pitch” on that subject to the assembled throng: 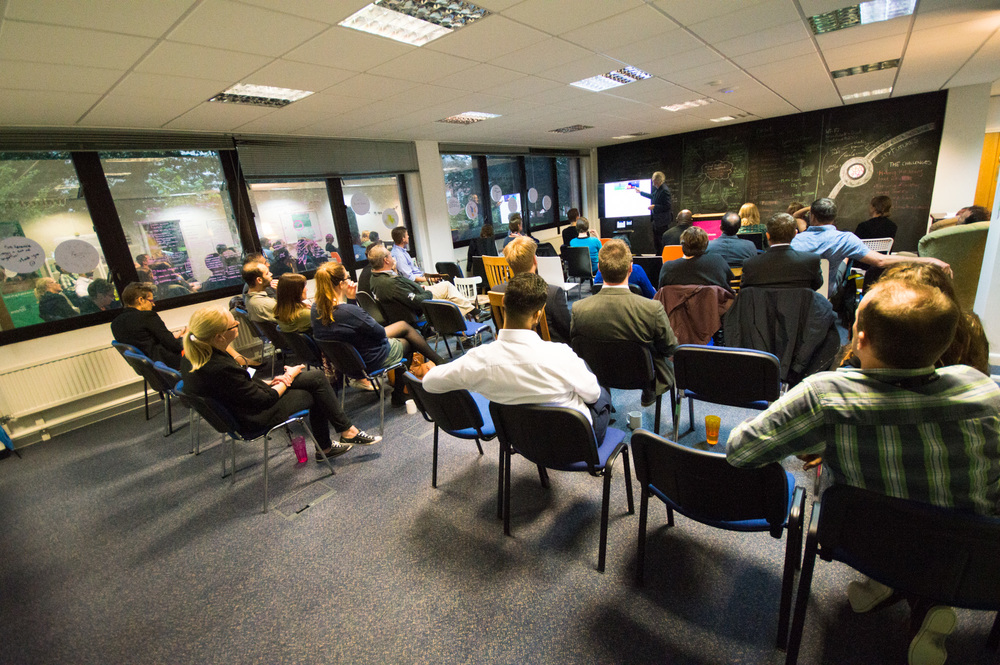 Here’s an expanded version of the PowerPoint slide deck I used. They all had Kasia’s “artist’s impression” of V2G in action at the top, so I’ll omit that part here. The first two slides are taken from a 2 minute pitch I presented at the Met Office on Thursday (see below) and have to conform to a template provided by the Knowledge Transfer Network. Hence:

I trust that is all self explanatory?! If not please see below or ask questions in the space made available for that purpose in the comments section at the bottom.

I always like to encourage some audience participation at these events, and Exeter City Futures delivered in spades! For the first time ever I didn’t need to blow my own bidirectional trumpet: 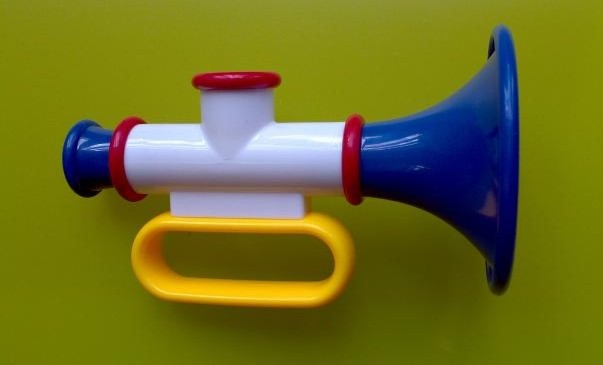 Timekeeper Lyndsey volunteered to blow the V2G trumpet for me, though ultimately it informed me that my time was up before I even managed to display the last slide, so make sure to read all about that below!

To make my “internet of big things” point I waved my trusty Raspberry Pi 3B at the audience. Here is what it looks like close up: 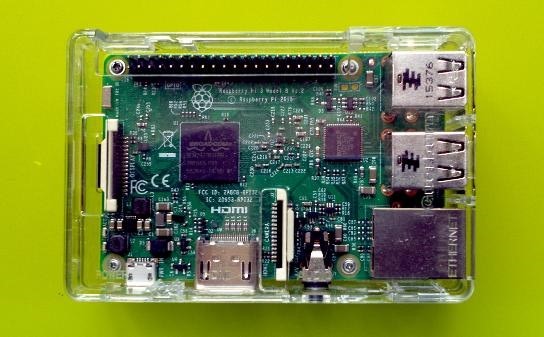 Dr. Sarah Ward from the University of Exeter correctly, if somewhat hesitantly, identified the mystery object. Now I’ve been programming the firmware (i.e. the software inside the hardware) in those sorts of devices for a very long time. 35 years ago single board computers were a lot slower and a lot bigger, but they still did the same sort of job. In those days they didn’t have USB ports like the Pi. Instead they had serial ports that conformed to the RS-232 standard. Getting two devices to talk to each other was always “interesting”!

I asked the audience to raise their hands if they’d previously heard of the “smart grid”. Quite a lot had: 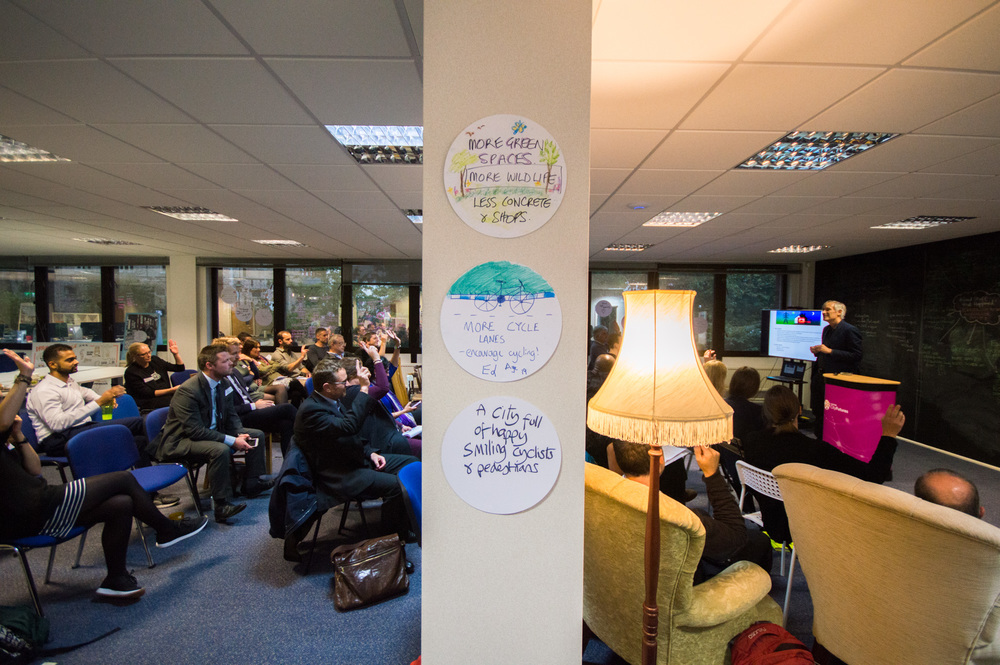 Then I asked who had heard of the “internet of things”. Slightly more hands were raised. The point being that hardware a lot like the Raspberry Pi is at the heart of your smartphone, at the heart of the Smart Grid and (albeit in a smaller form factor) at the heart of the Internet of Things. The main difference being that the smart grid has been around quite a lot longer than the IoT! A point that some of my audience at the Met Office on Thursday seemed to agree with since they nodded their heads vigorously at that juncture!

Moving on to slide 2:

I asked the audience if it was obvious what the infographic represented. I was subsequently informed that a hand had gone up in the far corner of the room, but I didn’t notice at the time. To explain, imagine a conventional home with solar PV panels on the roof exporting excess electricity to the local distribution grid. Now add some static batteries in the utility room or the garage. Store any excess “free” energy generated when the sun is shining in that battery. When the household electric vehicle returns from the daily commute charge it up from the battery rather than from the mains, since by now the sun will be low in the sky or already below the horizon in winter.

If you have that basic hardware setup available then there’s lots of other things you can do with it! How about buying electricity from the grid when it’s cheap and storing it in your static and/or mobile batteries. Then just for starters you could sell it back to the grid when electricity’s more expensive? There are other possibilities too, which brings me on to slide 3: 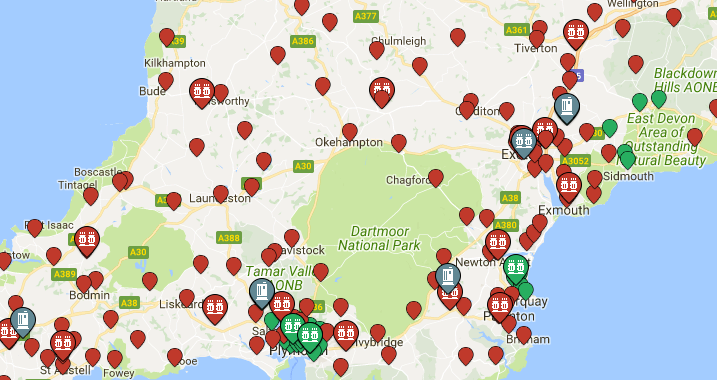 That’s a portion of Western Power Distribution‘s network constraint map. Note that most of Devon & Cornwall is plastered in red due to all the intermittent renewable electricity generation we have down here. One day (hopefully!) soon you’ll be able to earn money by allowing WPD to charge and discharge your batteries when it suits them, in order to help them cope with the stresses that intermittent generation can subject their electricity distribution grid to. The current fly in that particular pot of ointment are the rules and regulations currently enforced by Ofgem, which make it nigh on impossible for neighbouring energy “prosumers” to trade electricity with each other. Highlighting bullet point 2(c) I idly enquired if anybody else in the room “has had problems with Ofgem’s red tape?”. Not a single hand was raised in protest.

As regular readers will be aware, the town of Camelford in North Cornwall is an Air Quality Management Area (AQMA for short). Much like the centre of Exeter, the air quality in the centre of Camelford is fairly foul due to the noxious emissions of all the diesel engines that travel slowly through it. Electric vehicles can help with that, since they have no exhaust pipes and by and large use regenerative braking rather than rubbing dust off brake pads when they want to slow down. Hence slide 4 consisted of pictures of V2G capable examples of such vehicles, plus an image of the xStorage static battery storage device being produced from ex Nissan LEAF batteries by Eaton. An electric car club in Camelford and/or Exeter would be a small step along the road to reducing congestion and air pollution in both town and city centres, whilst V2G enabled vehicles in the fleet would also provide a mobile energy storage facility! 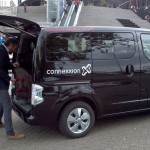 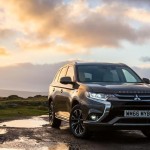 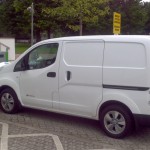 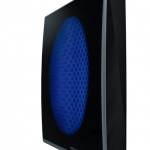 That’s about as far as I got on Wednesday before Lyndsey blew the metaphorical whistle on me, so I hastily concluded by mentioning this apposite comment from blog reader Chris:

It seems that struck a chord with at least one member of the audience. In the first image above you can see the back of Mark Hodgson’s head, if you know where to look. Mark’s Co-Cars car club certainly isn’t 100% electric, but it has just installed a couple of EV charging points in the Exeter area. That would seem to fit the bill for my bullet point 4(b) quite nicely?

Here’s the final slide I never had a chance to mention on Wednesday evening:

Of course solar PV isn’t the only form of RE generation, and batteries aren’t the only way of storing energy, at home or in the office. There’s also heat, and cold, and eddi & zappi: http://myenergi.uk/products/

What do you suppose that’s all about? To help answer that question let’s move on to Thursday and my trip to the Met Office. At least the previous evening’s rain had stopped: 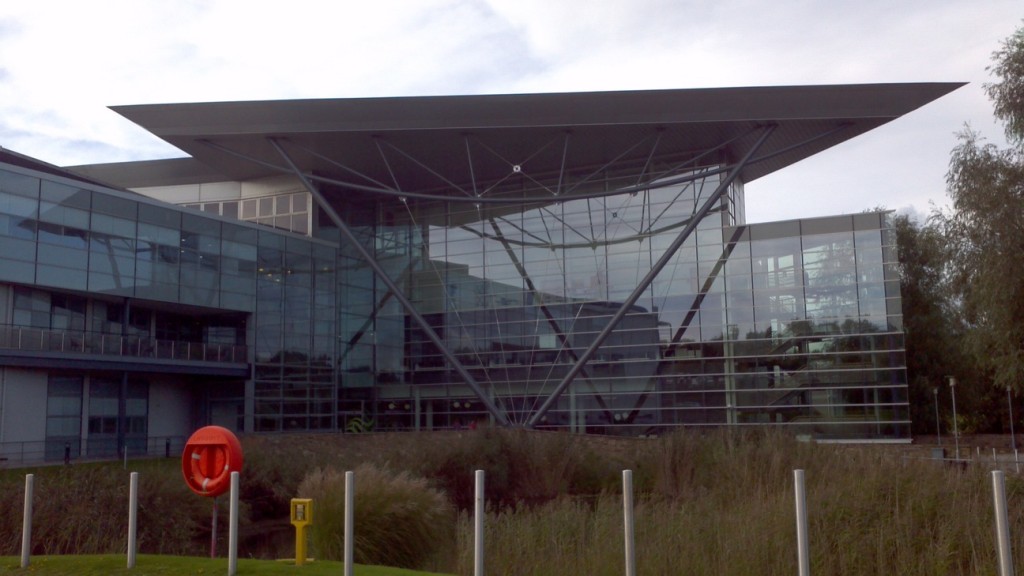 I was presenting at a briefing event for Innovate UK’s Emerging and Enabling Technologies competition. I got the feeling that since this was (one of?) the first KTN briefing(s) held in Exeter most delegates weren’t making the most of the KTN’s “Meeting Mojo” facility. Anybody who ventured in there would have discovered that I was hoping to meet:

Partners who appreciate that the “Smart grid” is a subset of “The internet of things”, and predates the IoT!

whilst offering a potential consortium:

Shortly before the event proper got underway I explained to the KTN’s Simon Yarwood, MC for the pitch session, that although I only had 2 slides in my deck I was actually representing 2 companies from a nascent V2G consortium. He graciously allowed me to overrun my allotted 2 minutes, and here’s what I added to the top two slides above: 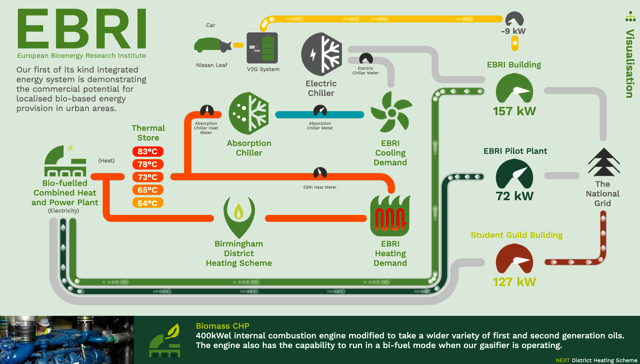 That’s a still from a web page that provides real time updates on the state of the building management system at the European Bioenergy Research Institute at Aston University:

As you can see at the top of that page, a bidirectional charging station with associated static storage connected to a Nissan LEAF pool car is employed at EBRI as both an energy source and sink, in what is the UK’s first V2x pilot project. Strictly speaking it’s vehicle to building (V2B) rather than fully fledged V2G, but as far as the charging station itself is concerned that is of no consequence.

The BMS software at EBRI is now being further developed by Grid Edge Ltd. who assure me that it utilises various machine learning methods using a variety of inputs including weather forecasts, energy usage history, WiFi connections and football match schedules to optimise the overall energy use profile of the building and the assets within. As well as a modest amount of battery storage the EBRI building also includes energy storage in the form of large tanks of both hot and cold water in the basement, as indicated on the real time infographic shown above. That’s where the MyEnergi system depicted in slide 5 above comes in. It doesn’t use complex prediction or optimisation software, but it does attempt to sensibly direct the electricity generated by domestic solar PV panels to charge your EV, heat up your hot water, or if all else fails export some to the grid.