Last week the United Kingdom’s Department of Energy & Climate Change published their new “Smart Grid Vision and Routemap“. According to DECC’s introduction to the document it:

Great Britain is already recognised as a European leader with respect to the investment in smart grid research and demonstration projects and has begun the nationwide rollout of smart meters, which will help improve network management and facilitate demand response. The Smart Grid Vision and Routemap outlines what action is now needed to build on this initial success to ensure the benefits are realised as soon as possible.

Delving into the routemap itself, I searched for any substantive reference to electric vehicles in general, or vehicle to grid technology in particular. Here’s what I managed to dig up. Firstly a diagram illustrating where EVs fit into the grand design of the future Great British Smart Grid:

Click on the image to see a larger version, where you will note it is anticipated that the “Traditional Distribution Network Operator, managing a largely passive network” will be transformed into a “Future Distribution System Operator, managing an active network supporting local balancing & system optimisation”. Electric vehicles are down in the extreme bottom left hand corner, under the heading of “Flexible Demand”, apparently totally separate from either “Energy Storage” or even “Distributed Storage”.

Secondly there is a forecast for the future growth in the number of EVs humming along the UK’s highways and byways, which looks like this: 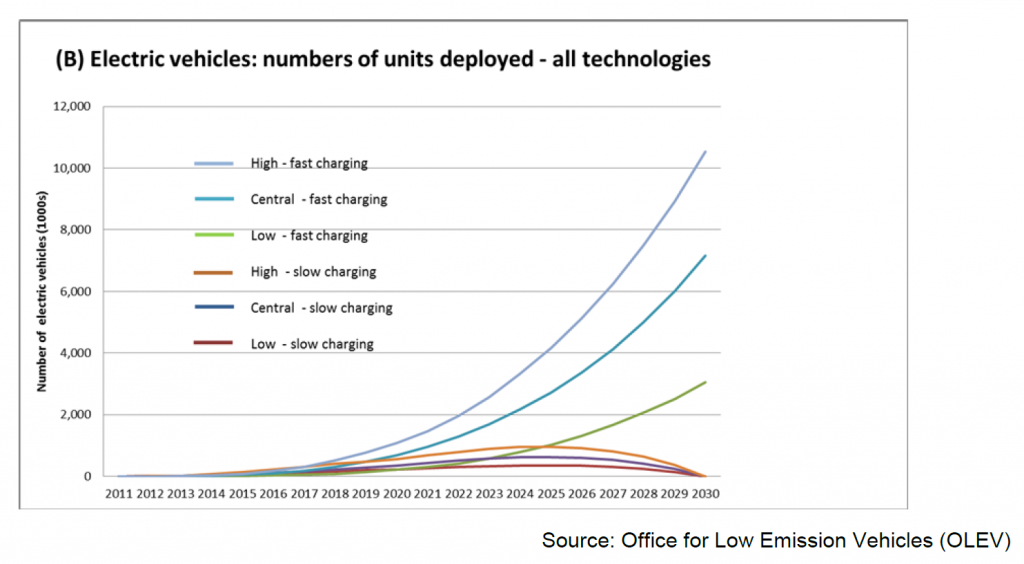 The significant bullet points in the document that mention electric vehicles seem to think that an EV is much like a heat pump. A future British smart grid will:

Finally there is a reference to another document, “Driving the future today – a strategy for ultra-low emission vehicles in the UK” from the Office for Low Emission Vehicles, which contains a few more bullet points about electric vehicles combined with smart grids:

At long last a reference to something resembling V2G, or at the very least V2H! Moving on to page 71 of “Driving the future today” I finally found what I was searching for, an explicit (if somewhat grudging) reference to V2G technology. I reproduce it here in full:

Vehicle to home and vehicle to grid

As the smart grid and battery technologies develop, there may be the potential for plug-in vehicles to act as backup energy sources for homes and supplement the grid during peak demand periods. Nissan already offers a ‘power control system’ to its customers in Japan which allows their LEAF car to power a house for up to two days from its battery pack. Development of this technology was brought forward following the Fukushima nuclear reactor disaster.

There remain issues about the potential impact of taking charge from vehicles on battery life and the investment necessary to facilitate this on a large scale. However, Government will continue to talk to industry and researchers in this area and monitor developments.

Storage has the technical ability to provide a number of benefits to the electricity system – for example, smoothing supply profiles from variable generation and potentially reducing constraint costs by allowing generation to run during periods of low demand. It can also potentially save or defer network upgrade costs that may be required in the future to meet peak demand. Sixteen organisations have recently been awarded a share of £2 million by Government to help develop innovative storage solutions for energy. This funding is helping to drive forward innovation and encourage private sector investment.

The only trouble then is that none of those sixteen projects mention V2G or V2H, although both the the EVEREST project and Aston University’s Hybrid Batteries to Grid project refer to “‘Second Life’ EV batteries” but unfortunately not to EV batteries in situ. It rather sounds as though “Storage to Grid” (or S2G for short) is a more likely prospect here in the United Kingdom than fully fledged V2G.