We pose that question because Mitsubishi Motors’ press release certainly makes it sound that way!

Hitachi Europe Ltd., Mitsubishi Motors and ENGIE have demonstrated a pioneering project to explore the potential for electric vehicles to act as a means of energy storage for an office building. For this demonstration, the consortium linked the first vehicle to everything (V2X) charger to ENGIE’s office building in Zaandam.

Hitachi’s innovative V2X Charger is the first recharger that cannot only recharge an electric car but can also discharge the energy back into the building/grid providing different flexibilities including kW, ΔkW, kWh and VAR. Moreover, it is possible to connect solar panels and external storage directly to the recharger, allowing a much more efficient electricity supply to buildings.

That all sounds as though Hitachi’s “innovative V2X Charger” is just the thing we need for our V2G “Living Lab” here in sunny South West England. Our “artist’s impression” of the concept is displayed above. As you can easily see it involves most of the buzz words from the press release, including V2H, V2G, Solar PV and “external storage”. It’s also 5 years old, which means we’ve done a lot of research into the necessary technology!

External storage and vehicle-to-building is obviously old hat. We’ve personally tested technology that does both those things at the University of Aston: 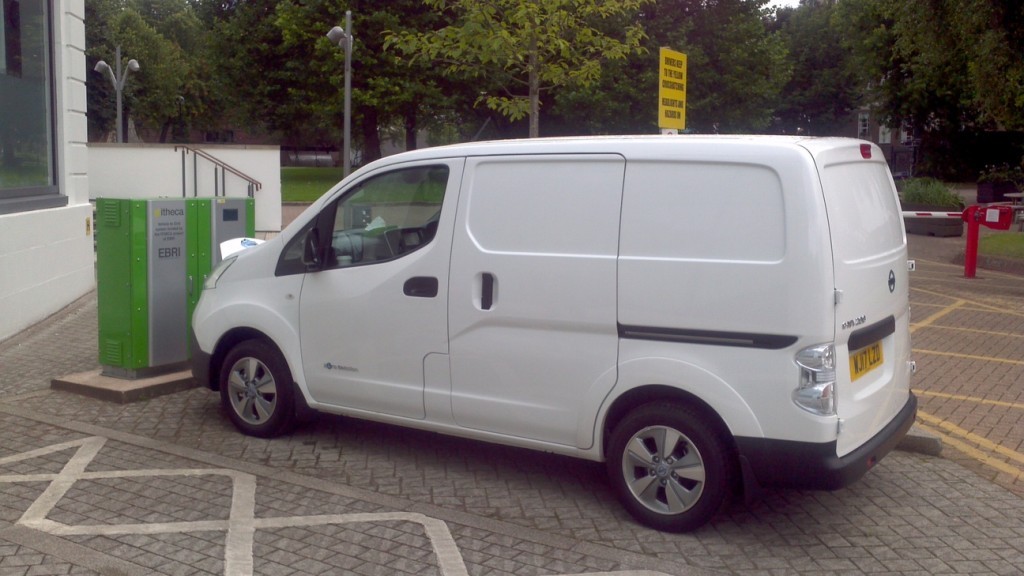 However the EBRI V2G pilot project didn’t incorporate “solar panels” so let’s take a look at another recent press release shall we? This one is from the Technical University of Delft in the Netherlands:

Electric vehicles and solar power systems are fundamentally direct current (DC) in nature, so conversion to AC leads to unnecessary conversion steps and losses. And two separate DC–AC inverters are required, increasing the cost and size of the power electronics.

Why not use a single integrated converter that charges the electric vehicle from the solar power system on DC? That is what Mouli worked on during his PhD research. Based on Mouli’s doctoral research, TU Delft has developed a quick charger together with the Power Research Electronics and Last Mile Solutions companies which can charge cars directly with electricity from solar panels. 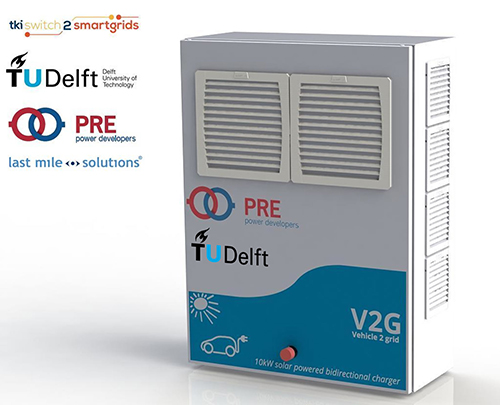 Delving further back into the mists of time last year we discussed Honda’s “Power Manager Concept” which looks like this: 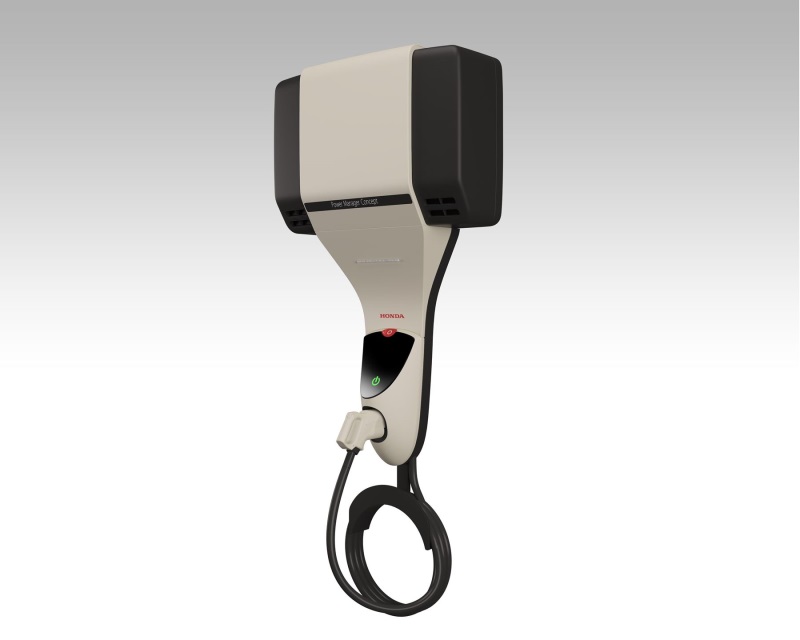 which is presumably based on their current Power Manager technology, which looks like this: 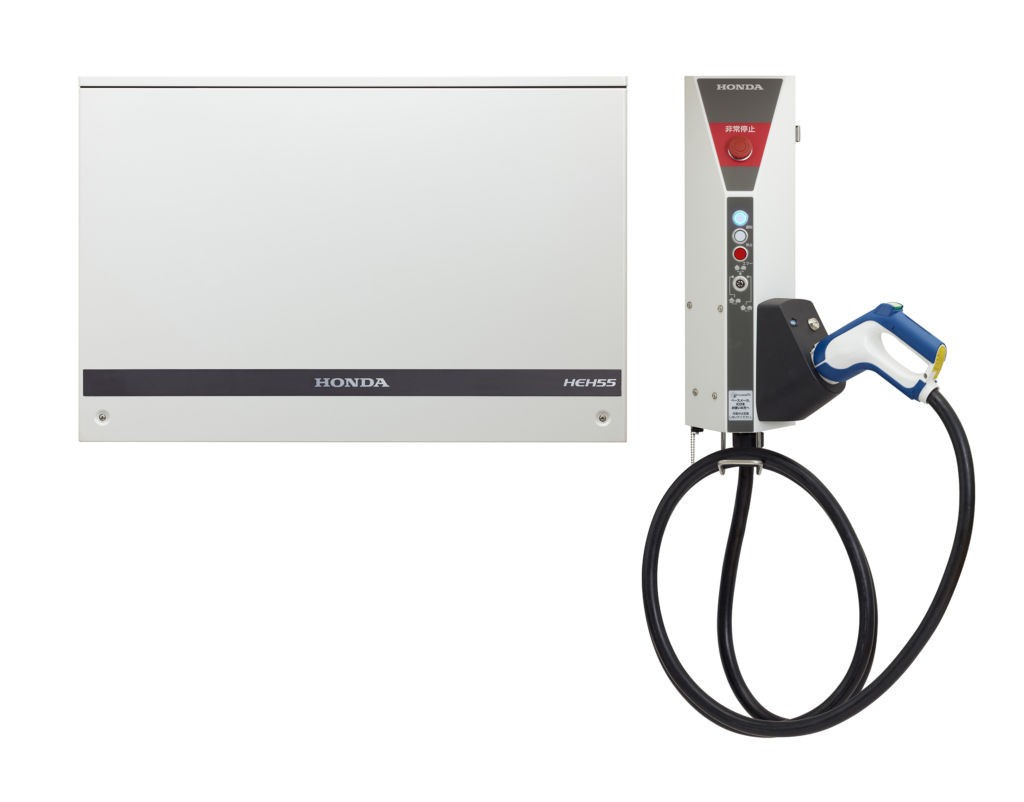 Power Manager Concept works by aggregating and distributing energy to and from the grid, solar panel-equipped homes or workplaces, and electric vehicles.

Electricity is received into the system from the grid or is generated by the solar panels and can be used to power and heat the building as well as to charge the EV. While the EV is plugged in, the energy can be stored and used at home or sold back to the grid, potentially generating value for EV owners.

Hitachi’s new offering evidently isn’t unique in that regard either then! Here’s their infographic of the ENGIE installation:

That makes it clear as a bell that they’re not doing pukka vehicle-to-grid yet either. Based on that image they also haven’t got any “static” battery storage installed at ENGIE yet.

We reached out to Hitachi and Mitsubishi, and whilst both companies have been very helpful we still don’t have a photograph of the equipment installed at ENGIE to show you. Hitachi point out that “the PV/Battery inverter functionality is the unique aspect of our charger”, but it’s still not clear to us in what way Hitachi’s claim to offer “the first vehicle to everything (V2X) charger” is justified. That being the case we have a suggestion to make. Perhaps Hitachi could let us test one of their new units at our V2G Living Lab just outside Camelford in Cornwall. Then perhaps we could swiftly establish for ourselves the veracity of the claims of Mitsubishi Motors’ marketing department?

Hitachi Europe have pointed me at this Dutch language press release from ENGIE which includes an image of their charging station in action: 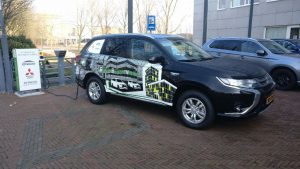