The United Kingdom Government have finally seen the light and have pledged to pump £20 million into vehicle-to-grid technology:

Up to £20 million is available from the Department for Business, Energy & Industrial Strategy – working with the Office for Low Emission Vehicles and Innovate UK – to fund projects that investigate new business models, consumer awareness and technologies that support interaction between electric vehicles and the grid.

So-called vehicle-to-grid technologies are expected to play a big part in making the UK’s electricity supply network smarter and in encouraging take-up.

Vehicles that can take electricity from the grid when demand is low and return it when demand is high could help to even out peaks and troughs and make the grid more efficient.

The UK government wants nearly all cars to be zero emission by 2050, and it sees a smarter and more flexible electricity system as a major benefit to consumers and a key to future growth.

This is of course very good news, apart from the time it has taken UK plc to get around to it! As a consequence of the announcement V2G UK booked ourselves in to give a two minute “elevator pitch” at a Knowledge Transfer Network V2G briefing event at the Energy Systems Catapult offices in Birmingham.

We decided we should travel in style, and Exeter Nissan kindly offered us an extended test drive in an almost brand new Nissan e-NV200 van! That’s much better for our purposes than a black stretch limo, which we will hopefully prove to you in due course. Here’s a photo of the Exeter Nissan team for posterity: 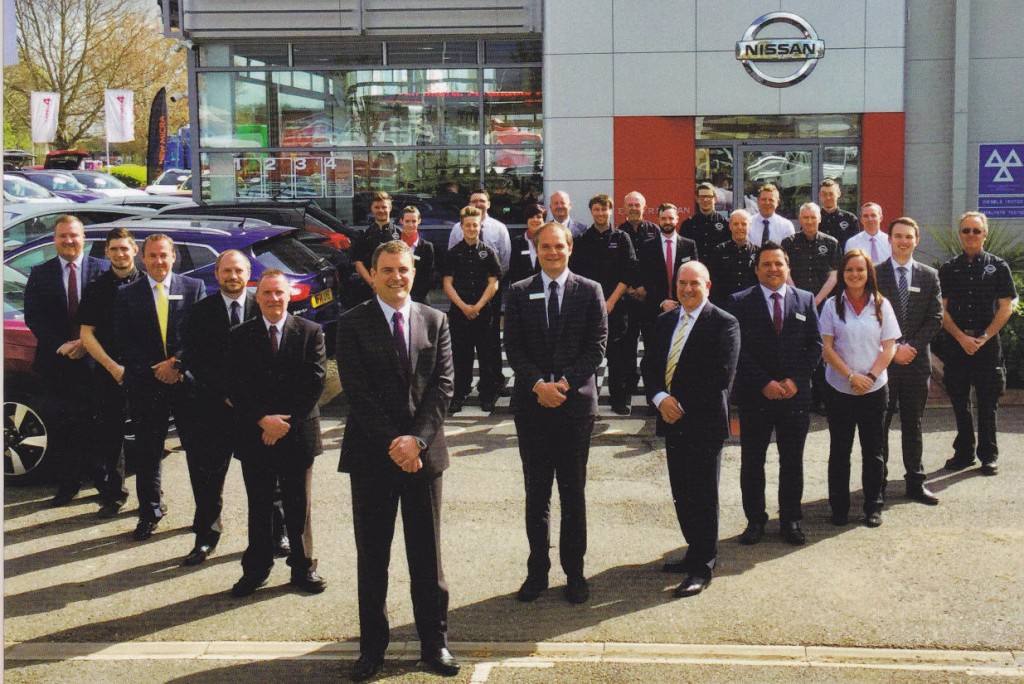 Arguably the most enthusiastic and experienced Nissan team in the UK!

We picked up the e-NV200 from them almost fully charged, and here’s how it looked at the time: 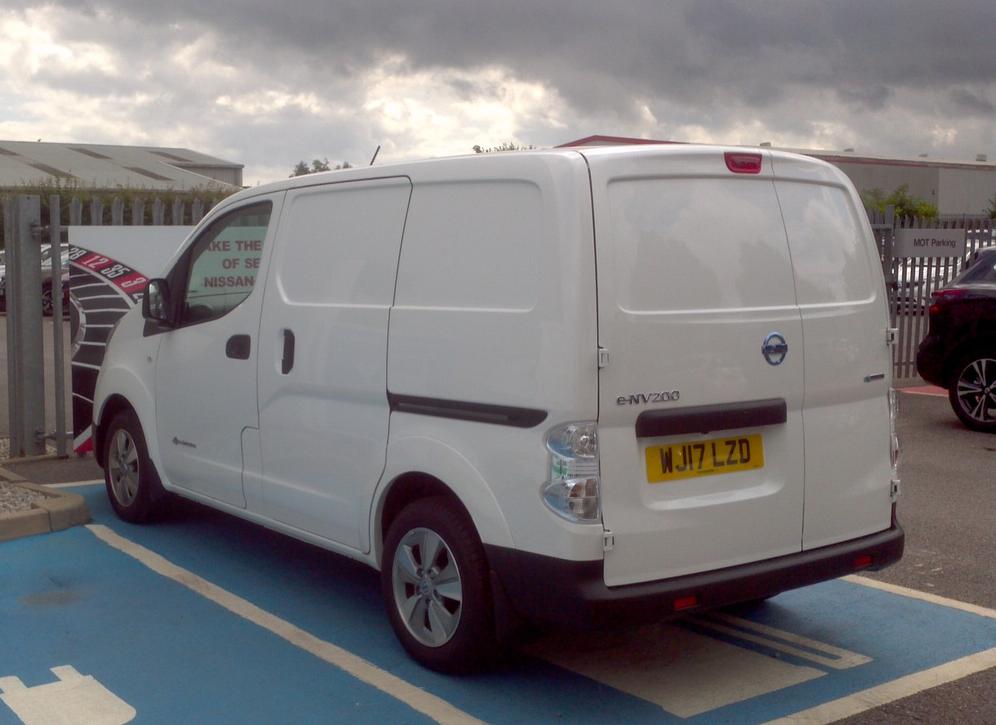 The weather wasn’t too bad, so we jumped straight in and drove the 56 and a bit miles up the M5 to Sedgemoor Services in “Eco” mode at a steady 60 mph or thereabouts. Now zooming up the motorway carrying an overnight bag and a couple of suits in the back isn’t a typical days work for a van, but with that proviso in mind here are some of the sights we saw on arrival at Sedgemoor:

The e-NV200 dashboard will be familiar to LEAF drivers, although there are some other differences. The “gear stick” is mounted below the dashboard, and the foot operated parking brake has morphed back into a conventional handbrake. In our case the 56 miles we’d travelled plus 20 left in “the tank” equates to a range of 76 miles by my reckoning, which is roughly what we achieved during the entire journey. 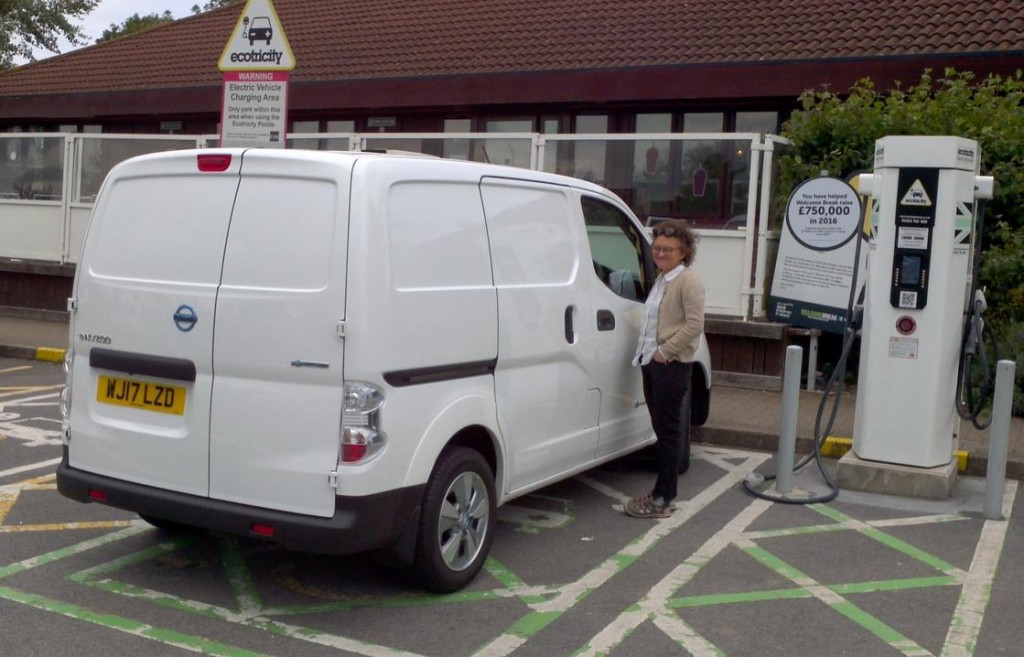 We’d used the old Ecotricity free “smart card” system on previous test drives, but this time we had to pay through the nose using their new smartphone app. That refused to install on my ancient Motorola Atrix, but we eventually got things working on Kasia’s more modern Sony Xperia. After a lengthy lunch break we returned to see this: 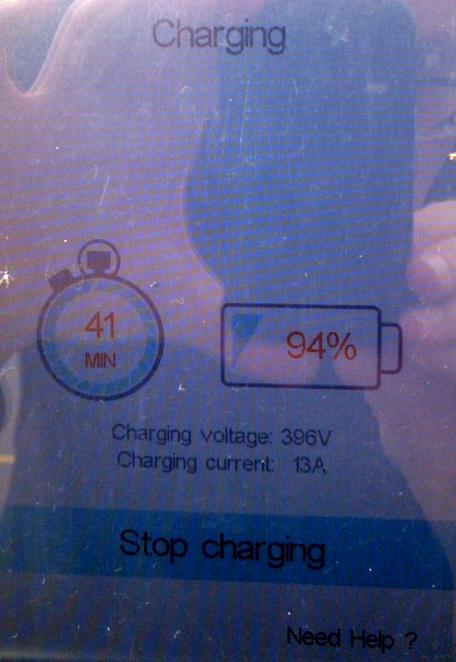 Stopping charging proved to be a non trivial procedure. Pressing the button on the charging station prompted Kasia to tap a button on her phone. That seemed to do the trick on the physical equipment but the virtual app insisted that charging hadn’t stopped yet. 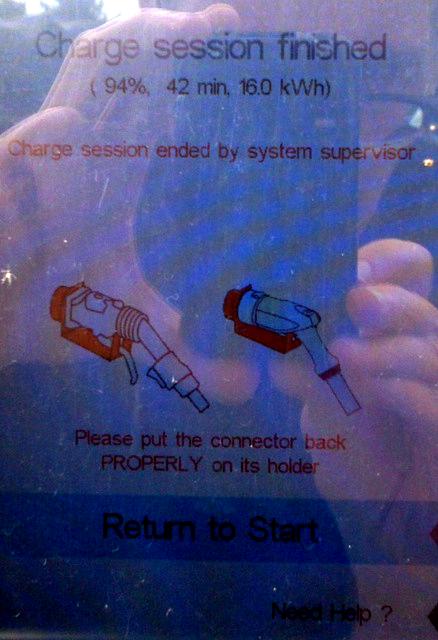 We eventually pressed on regardless to the shiny new Gloucester Services: 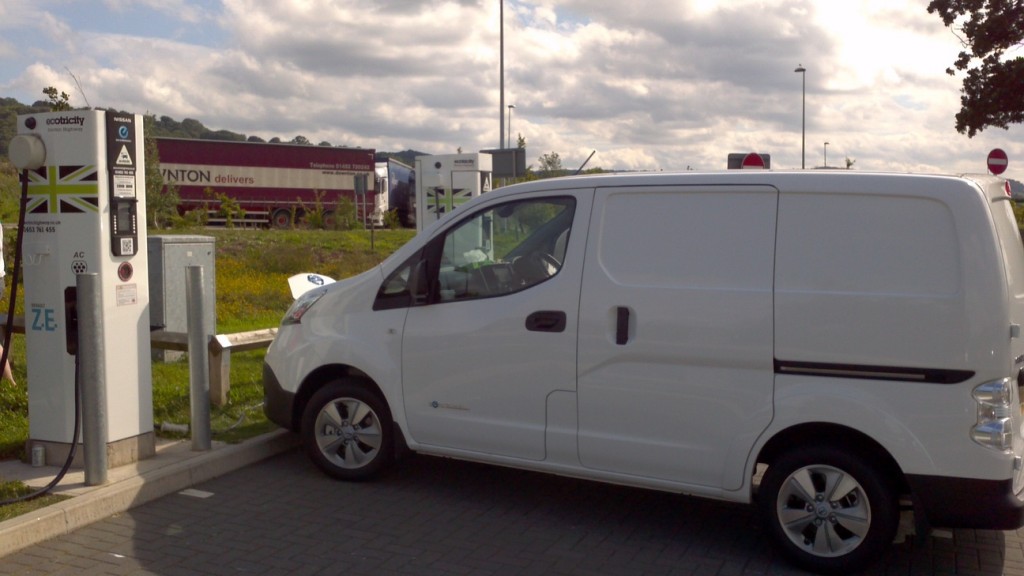 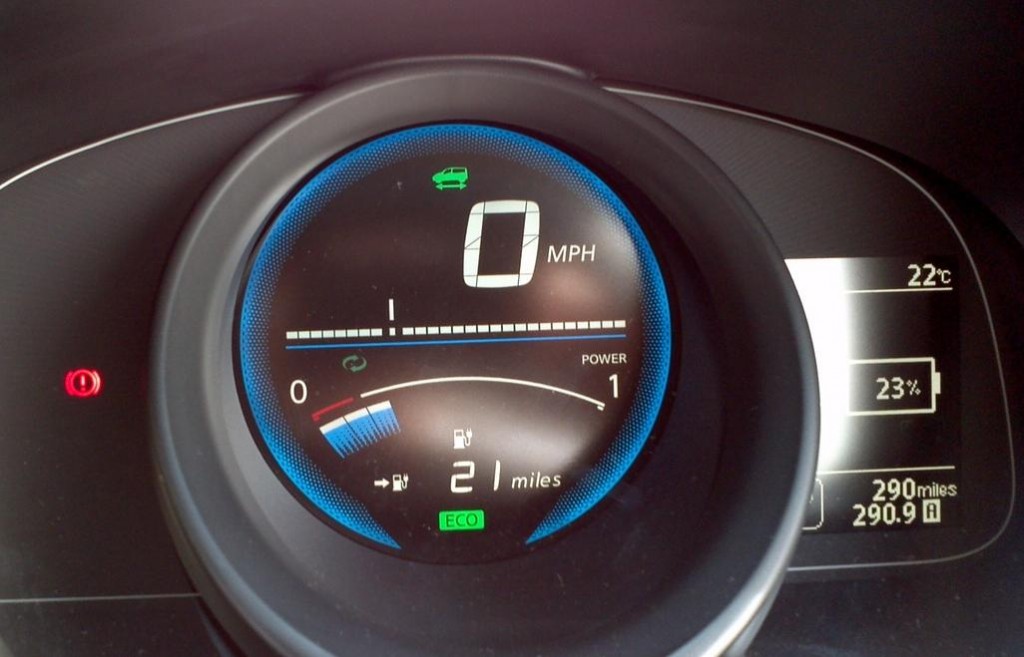 Kasia’s Ecotricity app was still insisting the charging session at Sedgemoor hadn’t finished yet! Power cycling her phone enabled us to get a new session started. After a slightly swifter coffee break this time we set off on the last leg to Birmingham with a 95% charge. That was when our troubles really began. The Nissan satellite navigation system kept insisting “you may be unable to reach your destination” even though there was apparently plenty of juice in the battery. It seems the M5 north of junction 5 was jammed solid. The sat nav eventually suggested an alternative route taking the A38 around Bromsgrove and then the M42 before heading towards Aston University in the centre of Birmingham. After several apologetic phone calls we eventually arrived at the European Bioenergy Research Institute well behind schedule: 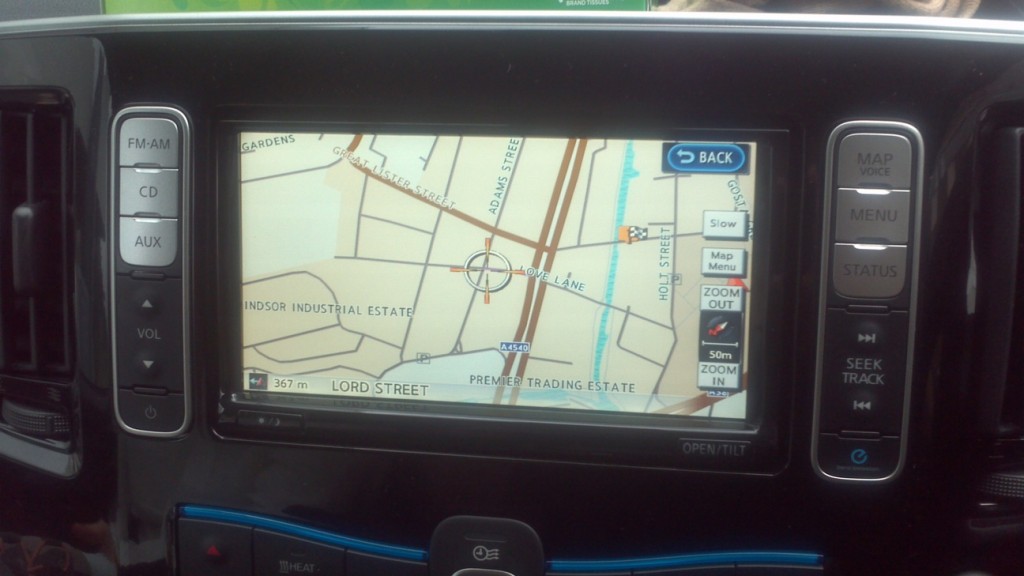 Thankfully in all the circumstances our e-NV200 started charging without problems on the ITHECA project‘s bright green bi-directional charger! 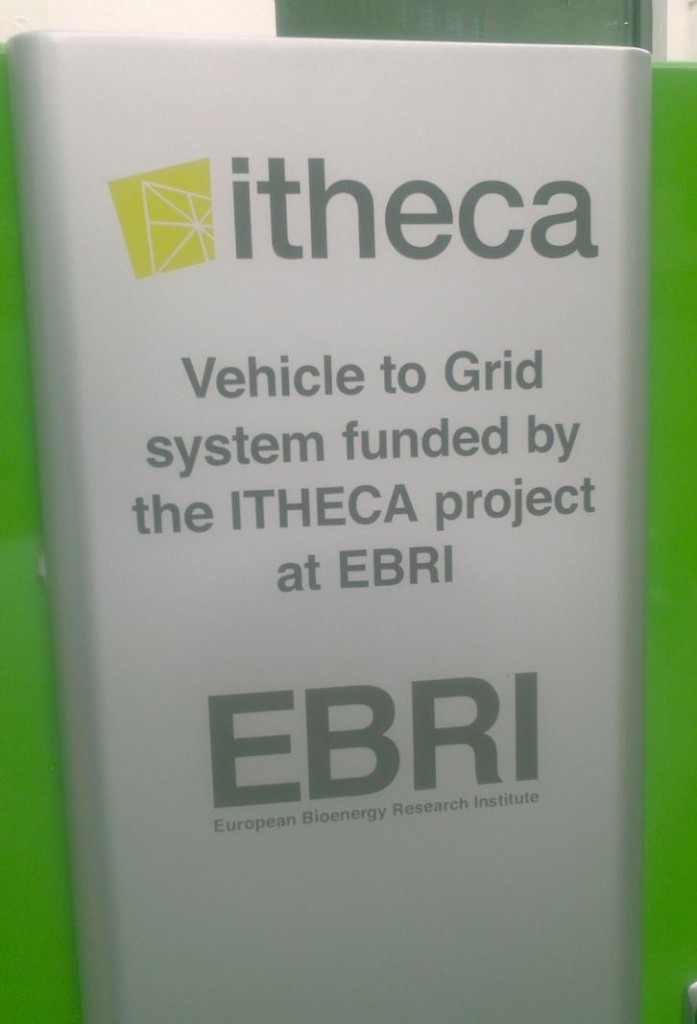 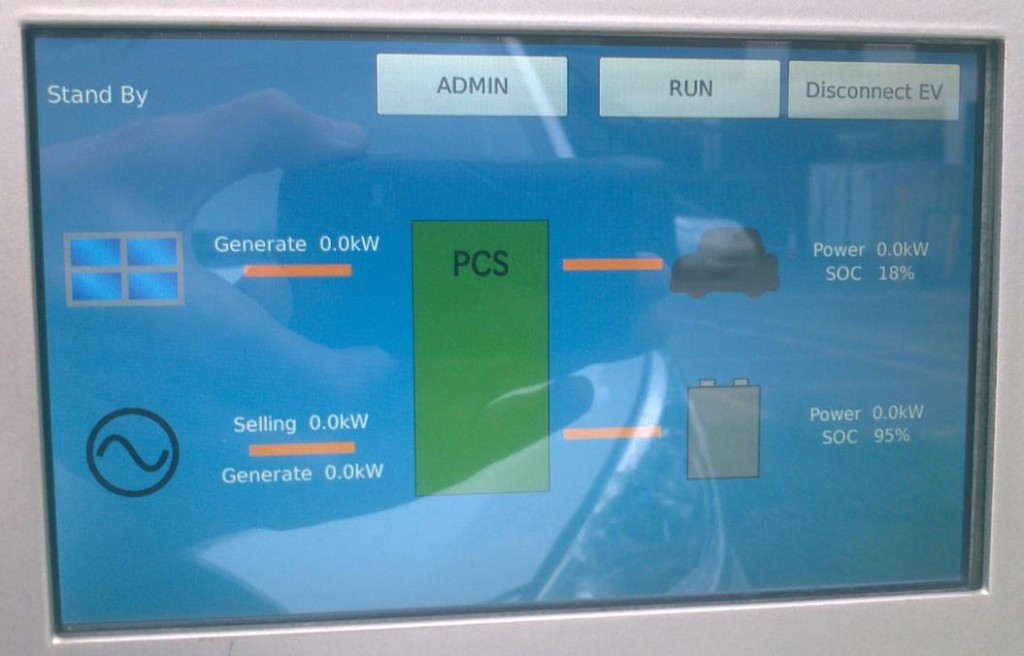