This is a piece of electric vehicle smart charging (V1G for short) news rather than directly related to vehicle-to-grid technology. It is extremely interesting nonetheless. In a press release this morning it was announced that:

Octopus Energy and Ohme are today announcing a partnership to offer Octopus Energy customers the chance to have smart charging at home – enabling them to charge any electric car when Octopus’s green electricity is cheapest.

By integrating with Agile Octopus, the UK’s only smart time-of-use tariff, the Ohme cable and app brings smart charging to any home.

Here’s the image of Ohme’s new “smart cable” that accompanied the press release:

Once the cable is connected, the driver can just open up the app and enter the amount they would like to charge their car and by when, and then let Ohme manage it for them. For example: “On weekdays, charge my car battery to 100% by 7am”. Ohme then uses the Octopus Agile API to automatically deliver the right amount of electricity when it is cheapest.

By optimising their charging in this smart way, Octopus Energy and Ohme estimate that customers using Ohme in parallel with the Agile Octopus tariff could save around £300 per year on their charging costs in comparison to charging on a typical industry standard variable tariff.

The Ohme cable is available for pre-order on the Octopus Energy web site. Whilst we wait for them to start shipping the new product, here’s an image of the Ohme app in action:

According to Ohme’s CEO, David Watson:

At Ohme we believe the future of transport is electric and that flexible home charging is the key to mass adoption. Ohme’s innovative smart charging cable is the first App-controlled, intelligent EV charger, that combined with Octopus’ smart energy tariffs, delivers real savings and environmental benefits. All you need to do is plug in and let Ohme do the rest.

I cannot help but think that the likes of Wallbox might well quibble with David’s “first app-controlled, intelligent EV charger” remark? The press release didn’t include a telephone number, but we’ll let you know Ohme’s thoughts on the matter when we manage to get hold of them.

After desperately doing my due diligence I eventually managed to have a long chat with Ohme’s technical guru, Dan Hollingworth, yesterday evening. As I strongly suspected, the Ohme “smart cable” isn’t actually that smart, by V2G UK’s standards at least. It contains a microprocessor and a 4G modem, not unlike our sister company V2G EVSE’s “smart controller” except that it doesn’t optionally do WiFi, Bluetooth, 2.5 G, 3G, LTE-M and NB-IoT as well.

Ohme’s device doesn’t determine the electric vehicle (EV for short) battery pack’s state of charge by communicating with the EV through the cable. Instead it finds out that useful piece of information by using its 4G modem to communicate with assorted EV original equipment manufacturer’s (OEM for short) cloud platforms, which in turn communicate wirelessly with the EV the Ohme’s cable is plugged into using proprietary protocols.

Ohme’s cloud platform is somewhat smarter since it communicates with National Grid’s Application Programming Interface (API for short) to forecast the “carbon intensity” of the UK Grid and thus determine the “greenness” of the electricity used to charge the EV to which the “smart cable” is attached. Here’s the current output of our open source example of how to go about doing that, generated by the V2G EVSE smart controller: 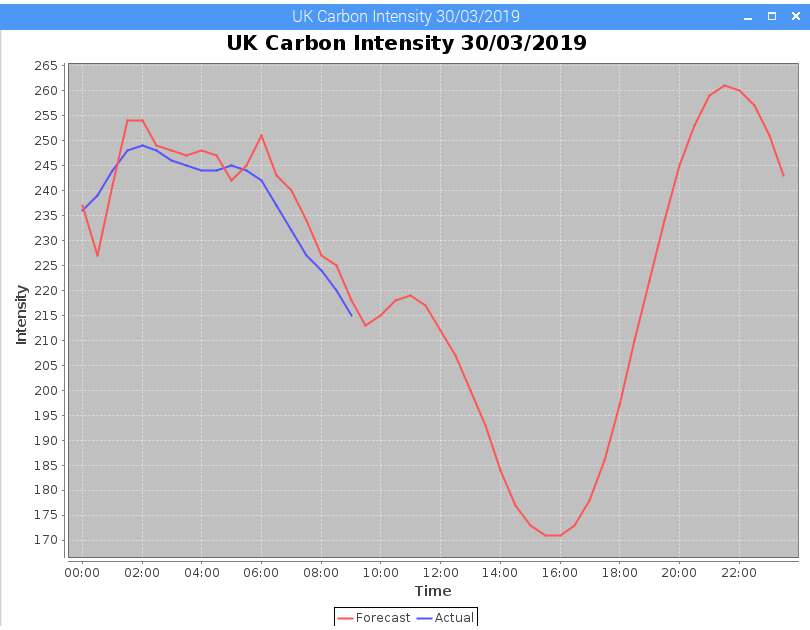 Ohme’s smartphone application (app for short) allows the EV’s owner to instruct Ohme’s cloud based platform how much charge they’d like in their EV battery pack by when. On the basis of all the information Ohme’s cloud based platform has acquired it then uses version 1.6 of the Open Charge Point Protocol (OCPP for short) to instruct the cable when and how fast to charge the EV it’s connected to. In case it’s of interest here’s our open source smart charging station simulator, based on a mildly modified clone of Thomas Volden’s OCPP 1.6 library over on GitHub:

Does that all make perfect sense now?

6 thoughts on “Octopus and Ohme Announce a Smart Cable”