Last Thursday we took the train up to London because the next morning we were attending a meeting organised by the British Standards Institution on the topic of “The future of standards for a smart, flexible energy system“. Instead of one of the BSI’s own offices the venue for the event was the conference centre of the Department for Business, Energy and Industrial Strategy, just around the corner from Westminster Abbey.

Apart from attending the event itself we were also one of five SMEs displaying our wares in an adjacent room. Here’s how our stand looked when we’d just about finished setting up: 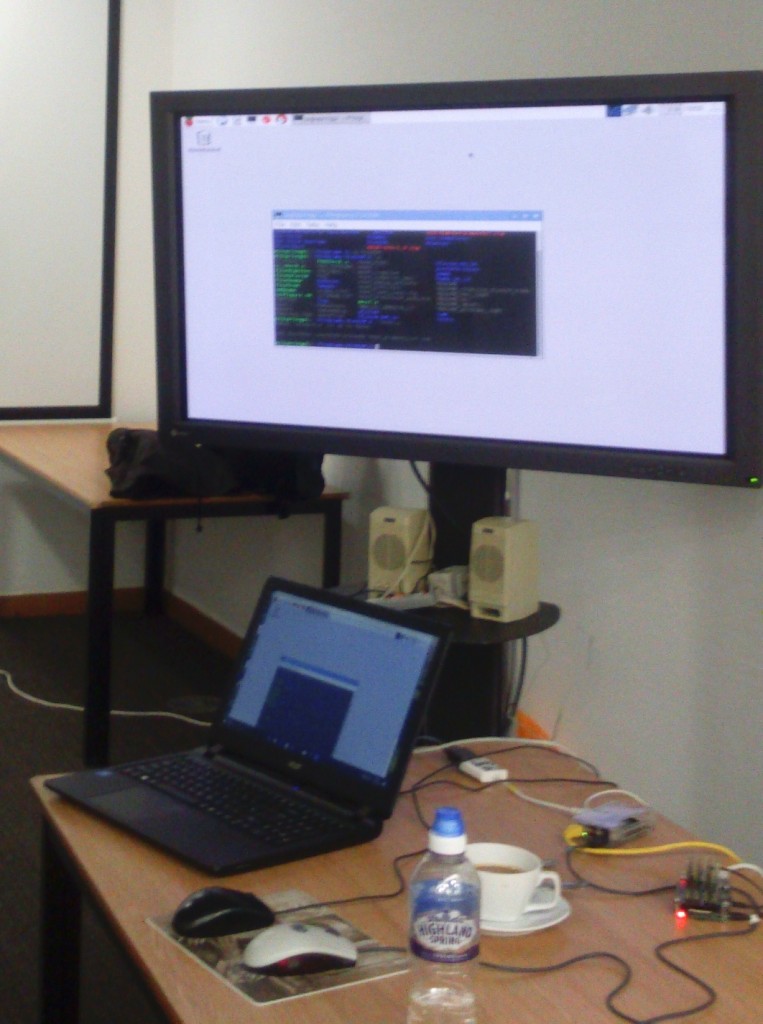 That was when a BEIS engineer told us what we’d missed during our journey the previous day. The announcement of the UK Government’s new Clean Growth Strategy:

This strategy sets out our proposals for decarbonising all sectors of the UK economy through the 2020s. It explains how the whole country can benefit from low carbon opportunities, while meeting national and international commitments to tackle climate change.

No doubt we’ll have much more to say on all that in due course, but for the moment here’s an overview of V2G Limited’s clean growth strategy, as displayed in the BEIS basement last week. First of all let’s take a look at the problem UK plc has committed to tackle: 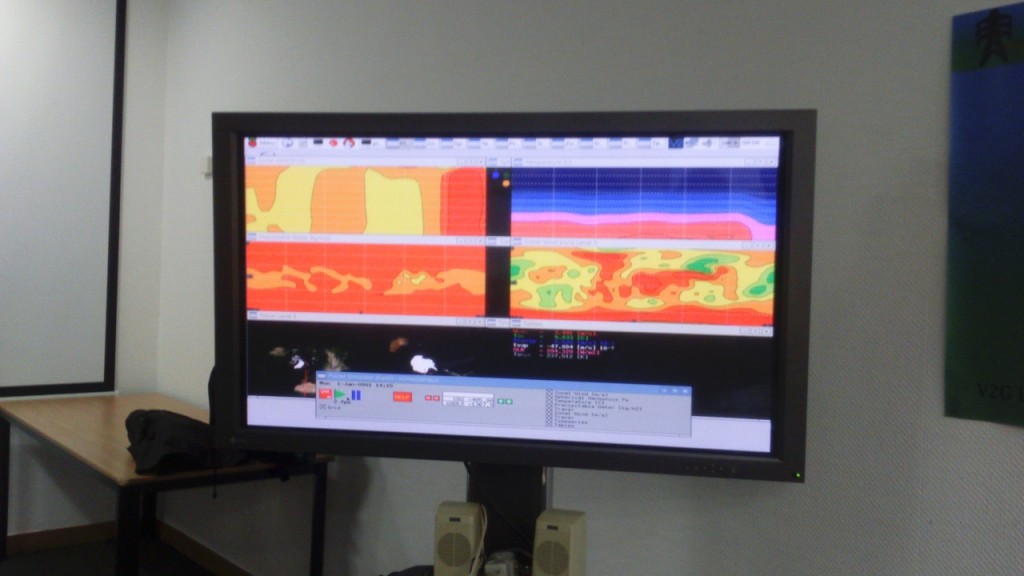 That’s the output of a “medium complexity” climate model running on V2G’s trusty Raspberry Pi 3B and displayed on BEIS’ 55 inch screen. Note that the carbon dioxide concentration had been increased to 405 ppm from the default 280. Amongst other things that’s a graphical demonstration of just how much number crunching bang you get for 1.3 bucks in this day and age. Now our little computational engine doesn’t forecast the weather of course, but the United States’ National Hurricane Center’s much larger engine does. Here is it’s Friday 13th forecast for Hurricane Ophelia: 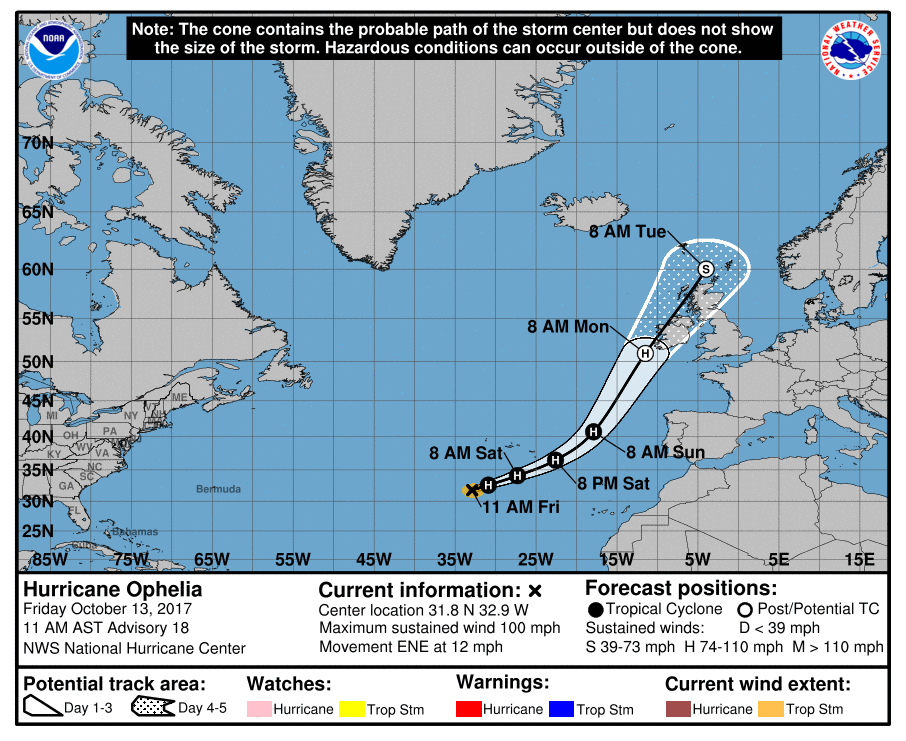 I don’t think anybody’s accurately added up the costs attributable to Ophelia yet, but according to Wikipedia at the moment:

Damage has been estimated at 1 billion euros ($1.18 billion USD), making it one of the most expensive storms ever to strike the UK and Ireland.

Having outlined the problem, here’s a slightly modified version of V2G’s 5 year old artist’s impression of part of the solution that was also on display in the BEIS basement: 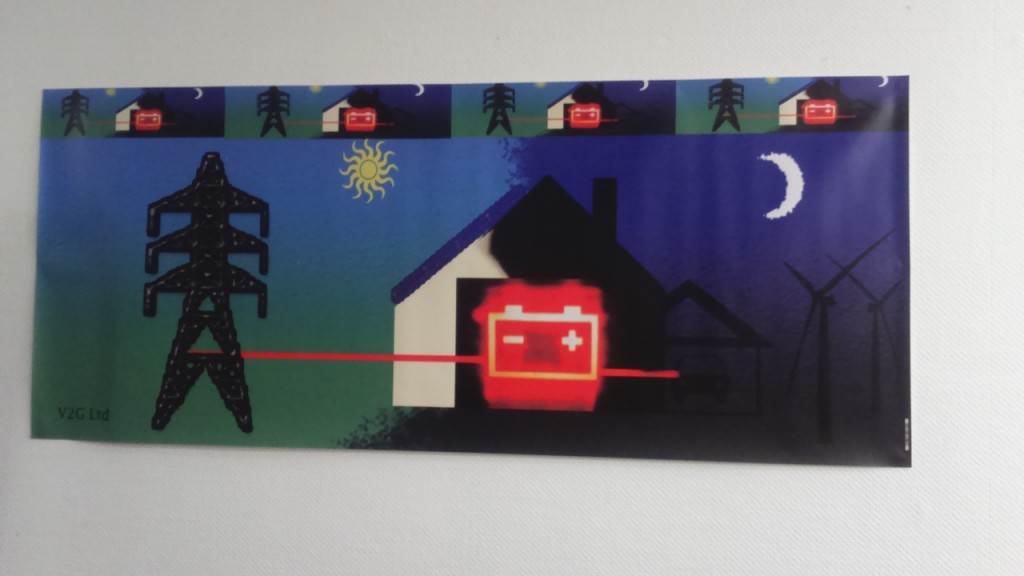 How much might the financial damage caused by Ophelia’s passage have been reduced if every building in the UK and Ireland had access to some local energy generation plus some static and/or mobile energy storage? Whilst you ponder that question, here’s a close up of our RasPi 3B together with its cousin, a Raspberry Pi 2B with a cluster of 4 baby Raspberry Pi Zeros on its back: 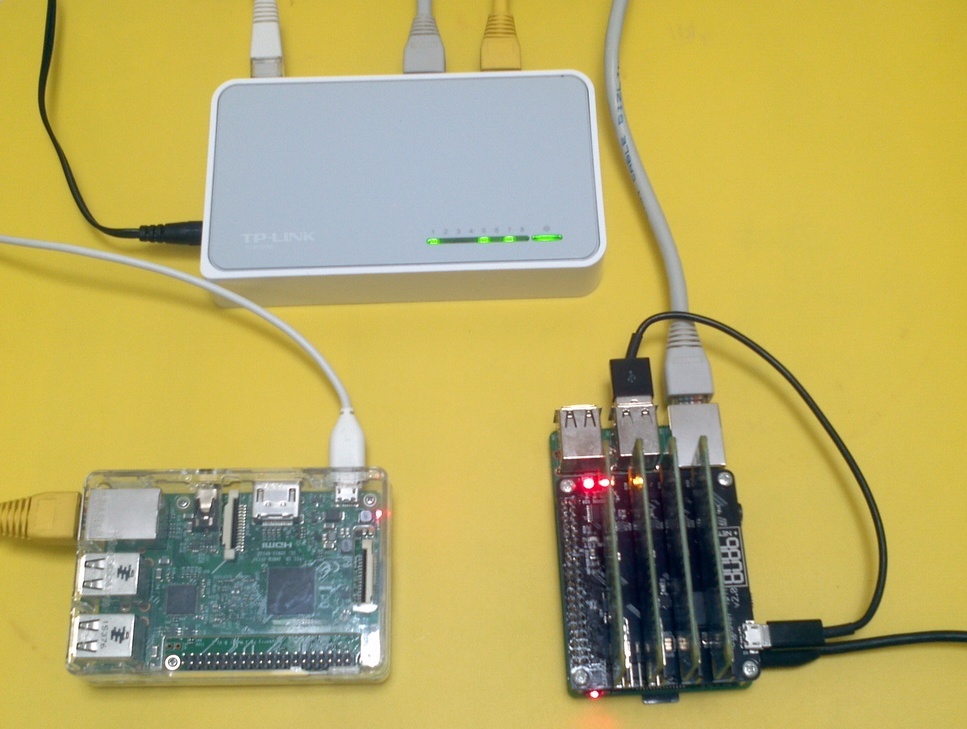 The RasPi 2 was running our new open source UK plc carbon intensity plotter. Here’s what that revealed on Friday the 13th of October 2017: 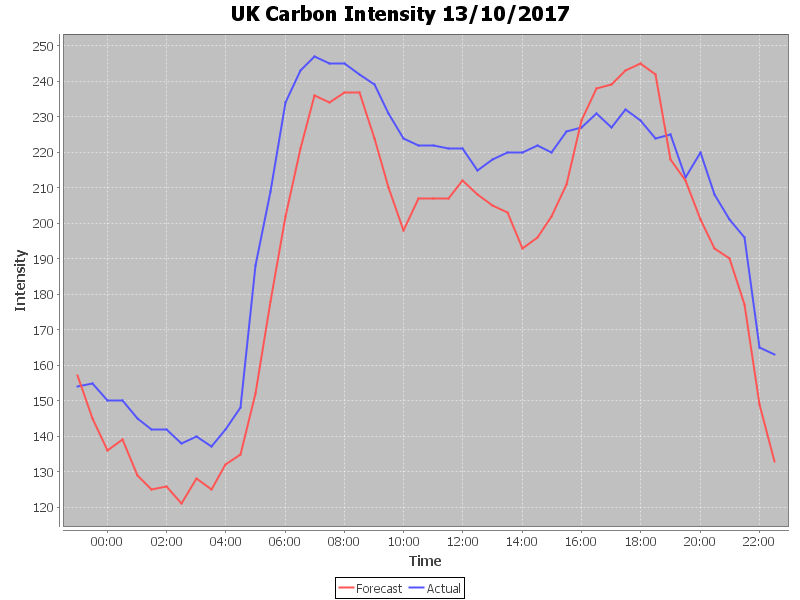 As you can no doubt readily appreciate the graph is not a horizontal line! The value at any time is dependent on demand of course, but also on the amount of renewable generation in the mix. That is highly dependent on the weather, and indeed the weather forecast should you be attempting to control UK plc’s carbon emissions. If you’re “committed to tackling climate change” you really should be committed to minimising the integral of the blue line representing UK plc’s actual carbon intensity. Unfortunately that’s not how the UK’s energy markets currently operate. Perhaps they need a redesign?

The Raspberry Pi Zeros only have a single core rather than the 4 cores on the climate modelling 3B. Nonetheless at a cost of four Great British Pounds a pop (plus tax) they are more than capable of acting as a highly “intelligent” device connected to a Great British “smart grid”. Ours already run a variety of British “standards for a smart, flexible energy system”. If you doubt that please feel free to read all about the time V2G’s offices suffered their very own “blackout”. As I pointed out way back then:

Such a piece of electronics wouldn’t in and of itself add a whole lot to the price of an electric vehicle and/or a garage in Dunchideock, or anywhere else on the planet for that matter.

I cannot help but wonder how much the Great Dunchideock Blackout cost Western Power Distribution, how much the evidently changing climate in this part of the world is costing and will cost them, and how their electricity distribution network is coping with the assorted stresses and strains generated by all the renewable power sources currently being tacked onto it down here in not so Sunny South West England that do not currently have any form of energy storage associated with them.

Moving on to the near end of our table at BEIS, here’s a LEGO tableau representing our artist’s impression of a passenger free connected vehicle driven by a “robot” deciding which of three possible electric vehicle charging stations it should connect to: 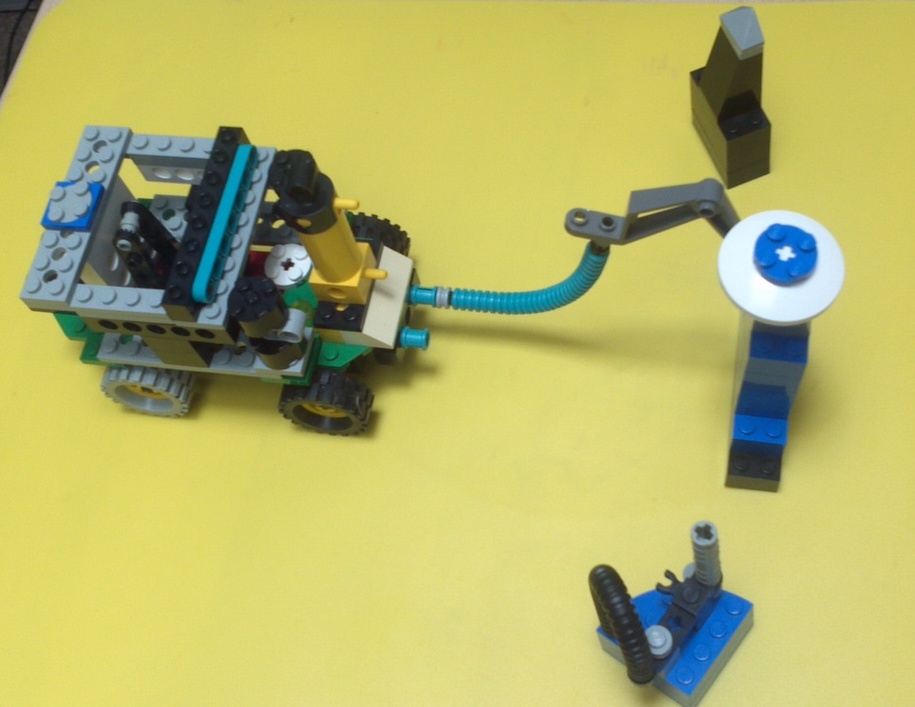 In this instance its battery is nearly flat, it’s in a hurry to pick up another human and the grid is in good shape so it’s therefore decided to select the ultra rapid “robotic” charging station. This may seem like child’s play, but it isn’t. On Friday Julian Anderson of Thales e-Security stopped by our stand. We had a bit of a play with the Lego and a longer discussion about the cyber security implications of connected vehicles and autonomous EV charging.

Here’s another point to ponder. Apart from BEIS and Thales we also had a long conversation with an engineer from Ofgem about “community energy markets“. However the people who make policy were conspicuous only by their absence from our audience.

N.B. There’s already another big storm on the way to us here in South West England, as well as Ireland once again. This one’s called Brian, and according to the Met Office:

A spell of strong southwesterly winds is expected. Some coastal routes and communities are likely to be affected by large waves, with potential for flooding of properties. Some transport disruption is likely across the warning area, with delays to road, rail, air and ferry transport. Short term loss of power and other services is also possible. 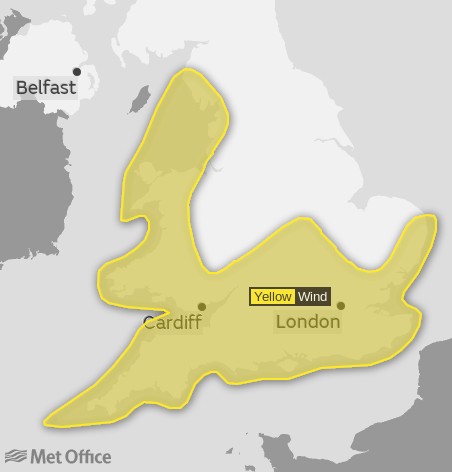